An old adage claims we have 100,000 bad drawings in us that we must get out before we can get to the good ones. Today we take a deeper look at that quote.

Sometimes it’s said to be 10,000 instead, but I’m reasonably certain in my lifetime that smaller marker has come and gone and I’m still anxiously waiting for the “good ones” to begin. The quote is attributed to Walt Stanchfield in some instances, Chuck Jones in others, and other artists at other times. Whoever the first person to utter it was, they were on to a great nugget of wisdom in art: You must put in the work if you want to improve. 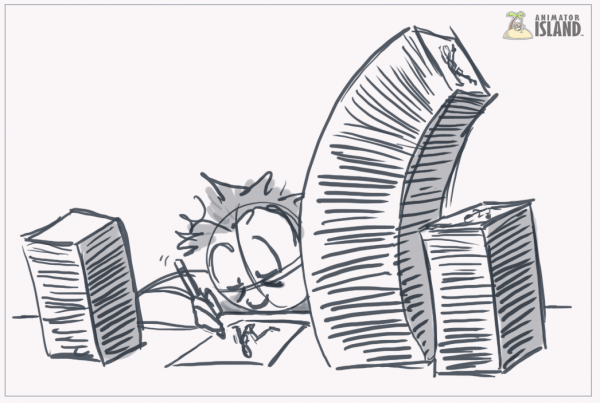 The truth is there are no set amounts of drawings or animations to be done, and no set time frame before you finally “make it.” For some it may seem to happen in the blink of an eye. For others- most others- it will seem to take a lifetime of struggle. Take hold of the root of this quote, though. It will arrive sooner if you put in the work. If you get out the “bad drawings.” This quote is not about the number at its core, it is about the effort needed to become a master.

This past week I decided to get those drawings out in earnest, and began keeping track via Twitter of how many were left to go. Typing “12 down, 999,988 left to go” is both inspiring and overwhelming, but it helps me to remember I’m on a journey and taking sincere steps to get where I want to go. (Then someone pointed out my math was wrong, and it was only 99,988 left and I felt even better!) If I manage to tick the counter down to zero or not isn’t the important thing: What’s important is putting in the time and energy and being conscious of it. Why not give it a try? The only thing you have to lose are the bad drawings inside you! The sooner you make a sincere effort to get them out, the quicker you’ll reach greatness in your art.

Save During my research for the big posing series I found the following pictures that illustrate perfectly how close a good pose is to a great pose. It’s amazing how much more energetic and powerful they are when you actually…

Save Hello! Here’s the first in a series of Q&A responses. I hope to answer and demystify things on your mind about drawing and animation. I also hope to help out by giving insight into the Animation Industry or the…

Save When you’re starting out (or even if you’ve been an artist for a long time) it’s essential that you have the strongest foundation you can. The first lines you lay down, or poses you block in, set the tone…

funny,inspiring and straight to the point

So it looks like quality improves with quantity. Quantity meaning the number of drawings, sketches, practice. And I think it’s true and it works, at least for me.

It gets tricky, doesn’t it, because artists sometimes don’t know if their drawings are good or bad. Other artists love everything they draw. I’m the opposite – I hate all of my work! 😉

Good luck with the challenge!

That’s a good point that you are bringing up there. I think both extremes can be harmful: If you think that all your drawings are good, you will stop improving; if you hate all your drawings, you might get really frustrated and depressed about it.
I think the best thing everyone can do is to look for something good and bad in all their drawings. Even if you are really good at drawing there must be something that could be done even better and if you are bad, there must be something good in it that you can build on.

I’d say just the fact that you’re trying can be one of those “good things” in a bad drawing! Think of how many billions of people don’t even get that far. The effort isn’t something to sneeze at! 🙂

It’s nice, though, when you graduate to a place where you can see glimmers of greatness in your drawings. The first time a nice, confident line appeared in one of my life drawings I rushed about to everyone who would listen and pointed at it saying “Look! Look! Hope!!” Most didn’t care, but it was a big moment for me, ha ha. It was the straight of the top of a leg going into a very nicely curved foot during a gesture drawing. First time I saw a line like that come from my own hand. I’ll never forget the feeling. 🙂

What happened, did you give up already? 😛