Sooner or later every animator will have the fun task of animating something in sync to music. No matter if your character is supposed to deliver a fine dance performance or subtly bobs his head, there are some tricks and rules that really can help you to create a catchy and interesting animation.

The obvious thing first: The beat of your song defines your character’s movements. As long as the speed of your song doesn’t change, the beat is a fixed reoccurring interval that has to be represented by visual highlights in your animation.

On the beat your character goes into a hit position – a special rhythmic event (like clapping his hands, making an important dance step, jumping, shifting his weight up and down or from one side to another etc.). Off the beat, your the character prepares for the next hit position (e.g. builds up momentum to clap, to jump etc.; or is in a breakdown position between two keyframes). 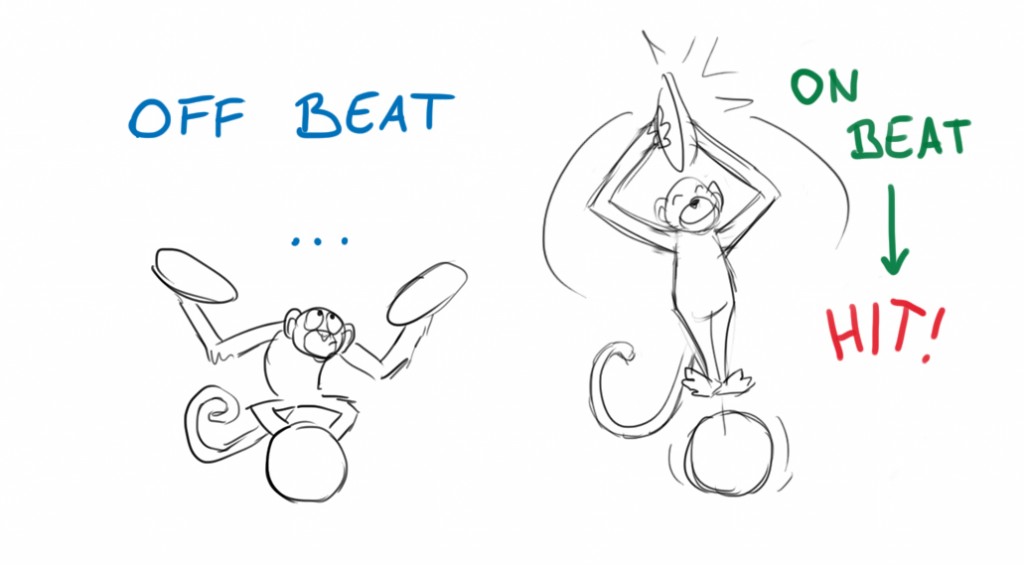 In the end the visual hits should be 2 – 4 frames earlier than the actual beat, but never one frame later! Usually you would animate exactly to the beat and then shift it a few frames when you are done. It really improves it! Try what looks best for every individual animation.

There are some traps you will have to face when you work with certain beats on certain frame rates. More about that later… Let’s continue with some basic guidelines for your animation first.

Because the beat is a repetitive event we can also use repetitions in our animation. No one claps his hands just once. Use loop-able cycles, where the last frame leads to the first frame again – as long as it’s interesting. This way you have more seconds filled on the screen, but less frames to draw! 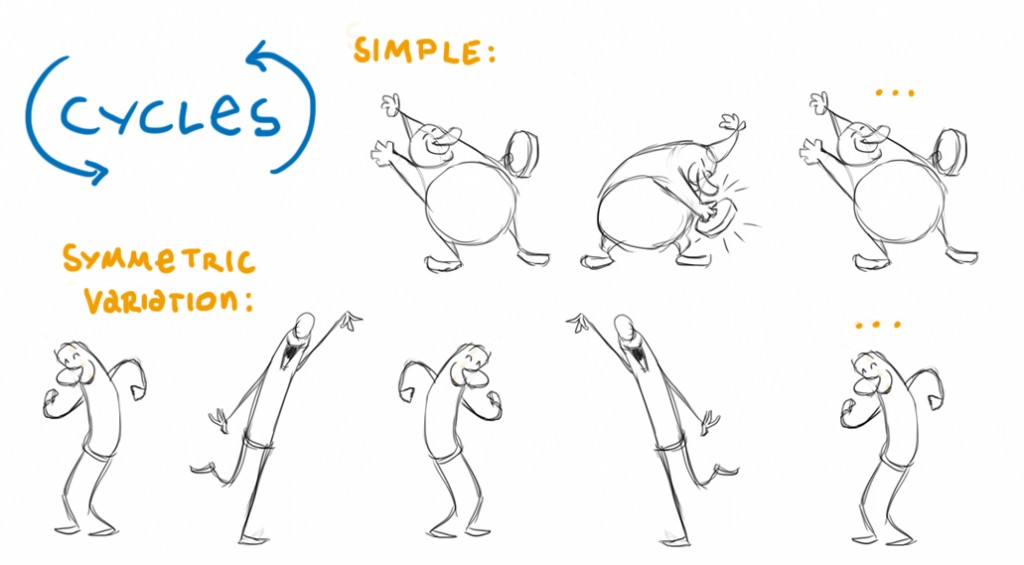 If you really don’t want your audience to see any repetition (in a classic dance for example), you could just reuse half of your cycle and then go into different one. This is often done in Disney films. Somehow we only notice the repetition if it happens two whole times.

Keep in mind: Cycles with an even number of frames are easier to animate, because you have a frame in the exact middle for the breakdown (or accents if you divide the space between the key and the breakdown).

Whatever you let your character do, the most important thing is to work with the ups and downs of the whole body. It is not so much actual dance steps that make your character get the rhythm – it’s his overall shape expanding and contracting. On the beat you can either drop the weight or make the character push himself up. Set visual contrasts by moving the body and arms up and down, left and right, streched and bend… 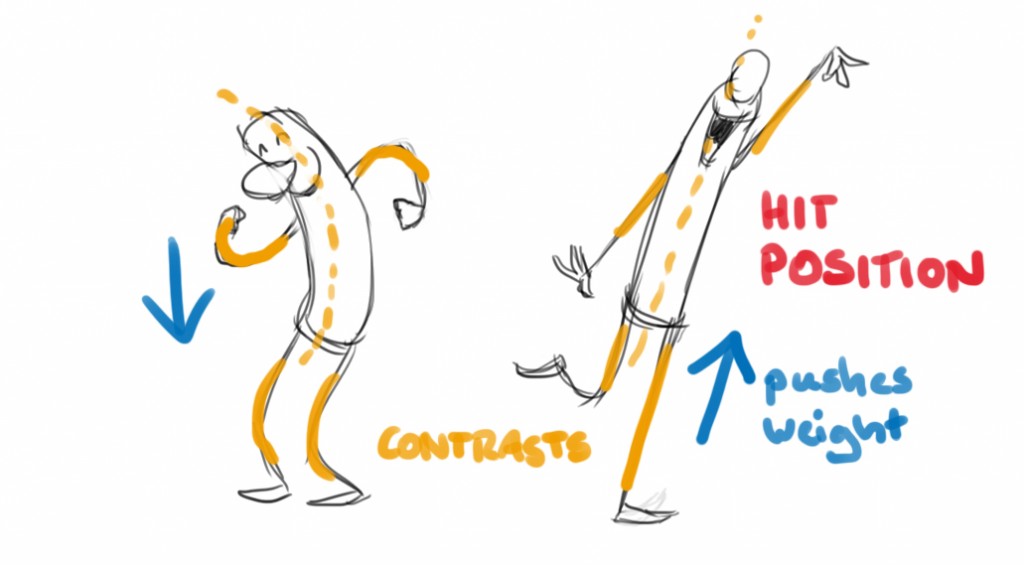 An important thing, especially for broad movements: Let the character snap into the hit position. You should not ease into it. The phase between the beat is often filled with anticipationPreparing a motion by first going into the opposite direction to build up momentum is called anticipation. The anticipat... More, allowing the character to jump into the beat with a huge amount of energy.

Also keep in mind that you don’t need to put the key between two hit positions in the exact middle. Try different approaches depending on what you are animating:

Let’s go back to the beginning. Before you start animating you have to figure out the rhythm of your music. You really need it to be exact or else, after some seconds, the animation will look out of sync, even when it appeared perfect at first! If you don’t have any other tool you can find out the beat by trial and error. Guess the beat, put a symbol in a fixed interval and see if it flashes in sync to the music. If it is too fast, increase the interval; if it is too slow, decrease it.

In the internet you can find tools where you can tap on your keyboard to the rhythm of a song and determine the beat this way. However, this might not be very accurate. You should only analyze the short snippet you are actually using, because the beat might change throughout the song.

The big problem is that the beat can be between frames. It’s pretty easy to animate if you have a fixed beat, lets say every 12 frames. You just put your hit position there, a nice breakdown or anticipationPreparing a motion by first going into the opposite direction to build up momentum is called anticipation. The anticipat... More in between and your dance cycle is ready to go. But this is a very ideal condition. Let’s have a look at an example where the beat lies between the frames. Here we have a metronome click on a fixed speed (120 bpm):

If we place our hit position every 12 frames, it’s too early after a while. If we place it every 13 frames, it will come to late. In this example the beat comes exactly every 12,5 frames.

Avoid problems by preparing the music

Whenever you have the opportunity to influence the music, you should take care that the beat hits whole frames. Musicians, of course, usually don’t calculate in frames. Two worlds meet here: We – the animators – need to know the beats per frames, so that we can put our hit positions on the correct frame. Musicians, though, work in beats per minute (bpm). In order to bring these worlds together, I am afraid we need to use… math: If you work with 25 fps, one minute has 1500 frames (60 seconds x the frame rate: 25 fps). So to calculate which frames the beat is on, you divide the Bpm of your song by 1500 (keep in mind that you get different values for other fps rates). This shows that a beat with 120 would indeed awkwardly hit every 12,5 frames (120/1500). You should tell your musician to use 125 bpm instead – it is almost the same speed and the beat hits every 12 frames (125/1500). See:

You don’t wanna do the math? That’s fine… We have a nice list for you with the Beats per Frames for various BPM on different frame rates. 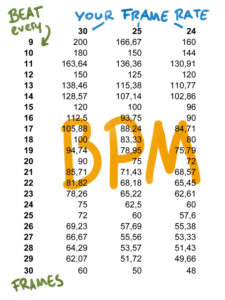 That’s quite a dry theory, but you need to be exact here! Sometimes it might be helpful to get a click track from your musician (or make one yourself) where you hear a metronome click very loudly. You can see these clicks in the waveform diagram that an animation program displays in the timeline.

I have to emphasize it again: You need to know on which frames the beat is on – otherwise your animation will never look right (especially if you have to deal with a tricky beat between frames). It would be a shame if you invested hours into creating a cool dance cycle, and it goes out of sync after a few seconds. 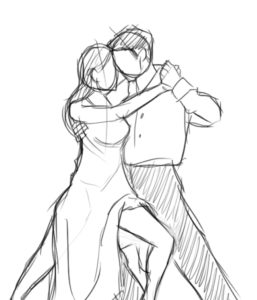 As for the other tips and tricks in this article: These are just guidelines, giving you a basic point to start with. Feel free to alter them. Try your own ideas, experiment with timing and posing until your animation literally rocks. What’s allowed is whatever looks good and groovy.

Now, please let me know your experiences with animating to music and your feedback to this article in the comments.

WOW this was super helpful! Also can I just say that your drawing of the couple dancing is fantastic? How do you draw so well? I’m learning 3D animation now but I want to also learn 2D and my teachers say I need to draw better. Can you do an article about that?

I would also like to see such an article. What do you say, Ferdinand? 🙂

I am glad that my article was helpful, Amy. 🙂 To be honest that last picture was more or less copied from a photo. I often trace the basic shapes and the angles to get to know the pose and then I try it freehand. I am not good at realistic drawing when it comes to shading and perfect anatomy – but I could do an article about posing because I put my learning focus on it since a few months. If you want to learn drawing I can highly recommend getting one of those “How to draw” books about… Read more »

That chart is pretty handy, thanks. I hate doing the math myself.

Yeah, I found myself doing the same calculations for every damn project. Finally I had a reason to make a chart… and even put it somewhere, where I can always find it again ^^

Sometimes stuff on animation’s kind of obvious stuff or too basic and don’t really say anything but this one was actually pretty well done. keep up the good work.

Outstanding article. Excellent examples! I just happened to be watching the video lectures by Professor Craig Wright and they are well worth the watching for the aspiring animator. One thing he mentions in session 4… I think (and I believe this can be used to raise animation timed to musical beats to a higher level) is that musicians do not tend to play the beat and yet when played we instinctlvely pick up the beat. (He says it much better than I can so check him out if you have the interest: http://videolectures.net/yalemusi112f08_wright_lec04/ Note that this course is for people… Read more »

Often people don’t understand how much time and efforts it takes to write such an excellent article, but this one was fantastic! Great job very helpful.

Wow… just Wow. This was an amazing help especially that chart. Thanks so much for putting it together.

huh I never looked at it that way. that’s a pretty sweet chart I’m going to print it out.

Wow, super detailed! I’m going to print this out to keep handy while animating, thanks.

[…] But of course you cannot and should not give everything the same rhythm. If you only need one exact middle and the 8 frame span is to slow for your character, you could go with “every six frames” with frame 4 exactly in the middle. The great thing is that it is a sibling of the eight (4 x 6 = 24 = 3 x 8) in case you need to make it work with any other timing related to the 8-frame-span. Want to read more about rhythm in animation? Look no further than Animating to Music right here!… Read more »

Good Work! Some years ago I made couple of semi-abstract animations for music. I noticed similar rules as yours. I also wroted an article about it. Here is
http://en.synesthesia.domanski.pro/theory/synchronization/
enjoy

Very helpful thank you. I would like to know more about doing music videos maybe if you have more information?

you should make a article about how to make the music video like the Gorillaz. 😉
https://www.youtube.com/watch?v=LoQYw49saqc&feature=kp

I love this! Can you do more on animating like music videos? I want to learn to do that.

Thanks! I’ve “learned” this before & just needed a quick summary ( & a table. Thank You for the table!) To get started again.

Hey, just wanted to note that the math part of the post was typed wrong. It should be frames divided by bpm (1500/120)