While discussing Disney’s Tangled recently, I was heralding the breaking of models that was so prevalent throughout the film. A non-animator that I was speaking with reminded me that he and others had no idea what I was talking about when I referred to “breaking the model” in 3D animation, so today let’s take a look at that very thing!

Stephen B wrote:
“What do you mean “break” the models? It’s not a term I’m aware of.”

To start we need to take a quick look at one of the major differences between 2D and 3D animation. In traditional 2D, hand drawn on paper, the only thing that ends up in any given frame is what you (the animator) puts there. When you move to the next frame, it is completely blank and you have to start over again to decide what will go there. In 3D, though, the second frame of two frames will begin as an exact copy of Frame 1, and then you go from that starting point instead of “nothing.” 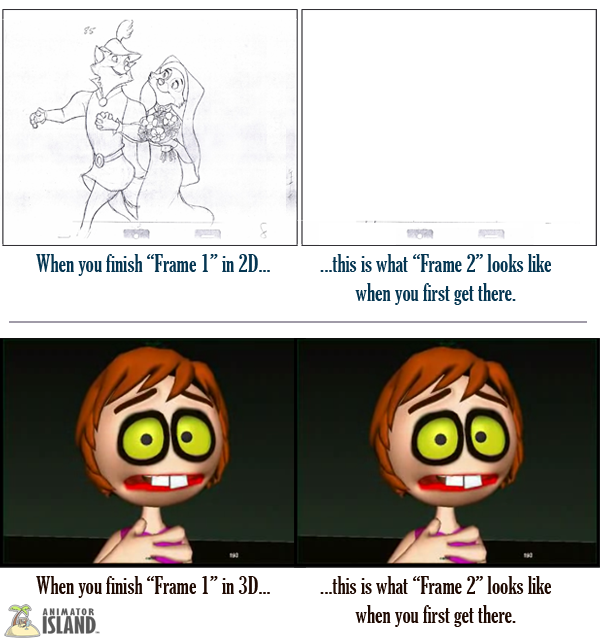 In 3D animation the animator is acting more as a puppeteer than a traditional animator. Someone has already modeled the character and that model has joints, motion controls, and functionality set by the modeler. As an example, in the original Toy Story Woody’s mouth alone had 58 motion controls. This allows for a great number of options for the animation, HOWEVER the 2D animator, not constrained by motion controls (or a 3D puppet), has at his or her disposal what is essentially infinite “motion controls.” Every frame is a new start, so there are no limitations at all. 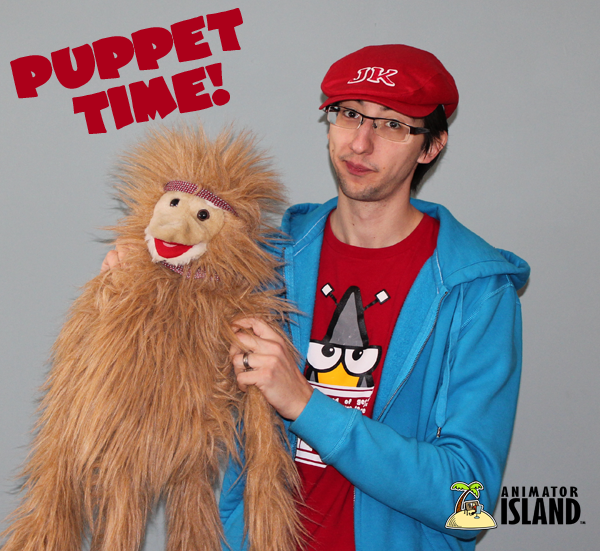 Just like a real-life puppet, 3D models have limitations. If you take a cloth puppet in your hands, you can stretch him and squash him to a certain extent. 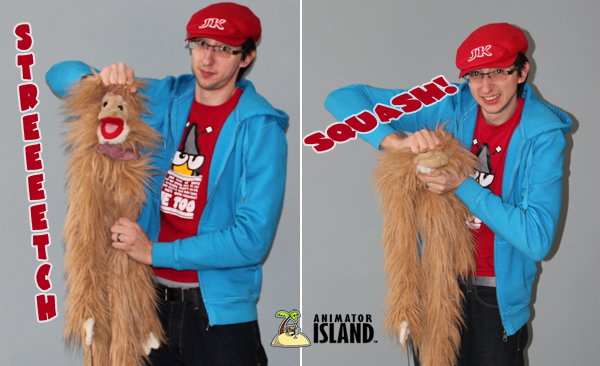 However if you pull too hard, you will rip the seams of the puppet and it will break. 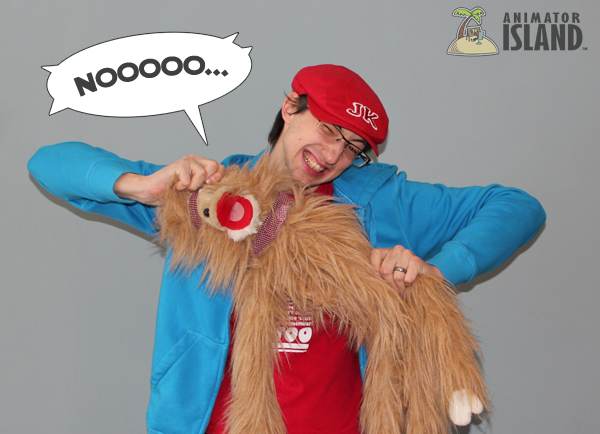 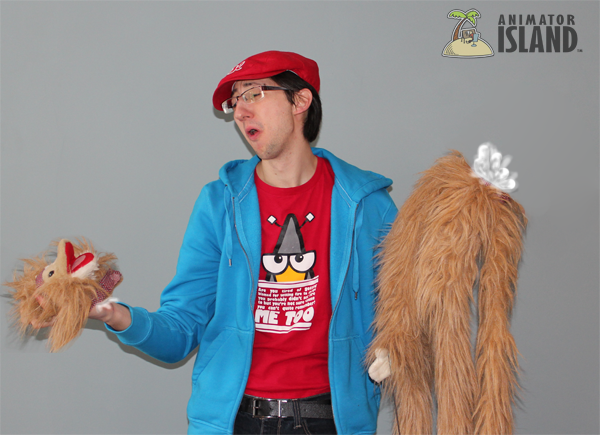 The same goes for most 3D models (though they have improved as technology advances). However in animation, very often you NEED to “break” or “cheat” something to get it to look right and beautiful. Even 3D animation is essentially 2D animation, because it is viewed on a flat screen. As such, you’re still playing with shapes.

That’s why the best 3D animation contains a lot of instances of “breaking the model.” It is taking the model well past what it was designed to do and treating it just as a flat shape on the screen. A great example of this comes from Tangled when Maximus (who has throughout the film the greatest 3D character animation ever crafted, in this animator’s opinion) is racing against Flynn to retrieve the satchel dangling from a cliff-dwelling tree. 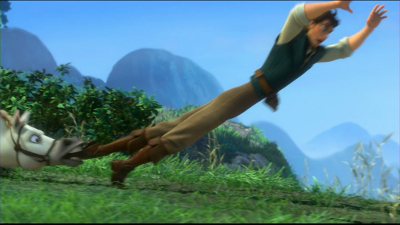 As you can see, Flynn’s character model is stretched WELL past what the character’s normal, realistic range would be. And yet when you watch the scene in real-time, it doesn’t look out of place at all. In fact, it looks terrific.

One of the reasons Tangled is such an appealing film to watch is because animator Glen Keane acted as Animation Director and worked closely with the 3D animators through the production. He drew 2D images over top of many of the 3D scenes and had the animators then match the work in 3D. Much of the time that required the models be broken, but it didn’t matter because the goal was not to have perfectly functioning 3D models on screen, it was to have living, breathing characters.

So, to summarize, “breaking the model” in 3D animation relates to taking the physical model past where the modeler built it to go. It is about treating the model less as a three dimensional set of shapes in 3D space and more as a two dimensional shape on a flat surface (the screen).

Now WHEN you should break a model is a whole other article for another time. Learning that art is what takes a lifetime of study and practice, and what separates the master animators from the novices. At least now, though, you’re equipped to take the first step down that road!

*No puppets were harmed in the making of this article. All puppet violence was added digitally.

I had a director once who refused to let us break the model. From my previous 2D experience I kept explaining you HAVE to sometimes, but he was a bitter old guy who refused to compromise. I’m glad I don’t work there anymore, ha!

Yes, good point, lilo! That is indeed what happens when you break the model in 3D sometimes, it will tear and cause all sorts of problems. That’s when you attempt to treat it like a shape instead of a 3D form, and you do your stretching thinking of it in 2D instead of literally trying to pull the model until it actually breaks apart and flips out. Though sometimes it’s funny to watch a 3D model flip out when it breaks, ha ha. Obviously not something you’d normally shoot for though!

I go to see everyday some web sites and information sites to read articles or reviews, except this one needs to updates more because it is good one.

Howdy! This post couldn’t be written much better! Looking at this article reminds me of why I animate in the first place. Scenes like that one from Tangled are just so gorgeous that it inspires us to be better animators. We needs more 3D animation like that!

But you can only get away with that for like a single frame or maybe two because otherwise it destroys the credibility of the film.

Great article and very fun read too, thanks!
(I actually had to go back to confirm that the puppet violence was indeed digital)

Its interesting to see that now, this breaking of the model principle is being used more in recent films. I remember frame by framing King candy, when he’s got Ralph inside the cupcake, all his actions are such beautifully choreographed with the stretching/squashing of the body and face, and its quite subtle at points, but its got a brilliant feel to it!

Great example! King Candy was helped along by Eric Goldberg, I believe, who did the Genie in Aladdin. He’s got such a great style for that sort of wackiness! Truly a master of squash and stretch. 🙂

Hi there, just wanted to tell you, I enjoyed this article. It was funny with the puppet thing. Keep on posting funny stuff!

I’m happy you mentioned Eric Goldberg, at least in the comments, because I carry his book, “Character Animation Crash Course” in my bag at all times. His work, especially of the squash and stretch variety, has been extremely beneficial to me. I highly recommend his book.

Wonderful article. And I’d agree that Maximus is one of my favorite animated characters to watch. The animation really helps carry the comedy in this movie.

I wаոteɗ to thank you for this fantastic rеad!! I absolutely never know how to explain it to people I know who don’t animate but the puppet makes it easier.

Thats why more people should draw over their animation in 3D in 2D!!!

really great article…I’m currently working on a 2d cut out animation ad at my work…even though the way the 2d puppet is been design can limit the animator.. I still always manage to break it and use it beyond its limitations just to achieve some actions…with this article encouragement I’m still going to break more..Lol

The same could be said for choosing the right camera angle. Sometimes you don’t need to break the model so much as you need to go back and move the camera because it is in a stupid place.

The new Peanuts Movie trailer seems to have done this a lot so I’m really excited for it!!!

Thanks for this article. I am an academic who works in film studies and this relates directly to research I am doing on the differences in expressive capacity between traditional and CGI animation. I have an an observation: even with the possibility of directly ‘breaking the model’, it seems to me that 3D CGI still cannot approach the capacity for constant metamorphosis already displayed in the ‘first cartoon’, i.e, Fantasmagoria by Emile Cohl. That film is like a non-stop demonstration of drawn animation’s power to metamorphose and deform, which is allowed by the fact that each frame is free if any intrinsic structural constraints. The effect is hallucinatory. Cohl doesn’t just bend and stretch shapes; he collapses and turns space itself inside out at will. By contrast. Luxo Jr, a breakthrough in using CGI for characterization, uses the structural limitations of objects to express character. The very phrase ‘breaking the model’ implies that the model still dominates in a way that is completely foreign to drawn animation, which is why CGI characters that are defined by metamorphosis – like Jack Jack or Scrat – seem so memorable and exceptional against the backdrop of their rigidly defined worlds (personally, I think Scrat is by far the most charming character in Ice Age, and it is interesting that in the first film he is set against a minimal background, without any perspectival or dimensional structure, almost like a fond memory of the blank cel of drawn animation and the freedom it implied). So, my point is that the expressive capacities of drawn and 3d cgi animation are different in really deep and fascinating ways. Thanks again, I will definitely cite this article in my own essay.