Creating your keys takes a lot of time and thought. You’ve done dozens of thumbnails, thrown out tons of variations that didn’t quite work, and after a lot of refinement, you can see that your keys are strong, functional poses. You tap the keyboard or scrub the timeline and everything looks solid. And then?
Ahhh… That confident feeling you get when you’ve done all your keys, you’ve timed them out, and everything is working just as it should. All that work has paid off. Now it’s time to inbetween or spline, to bring smooth movement into this nice structure you’ve spent so much time creating…
…and…
It’s flat. It’s “meh.” You scratch your head. What happened?! Everything seemed so promising! Where did that magic go?
The truth is that your keys were probably wrong. “They WEREN’T wrong! I checked them a thousand times! They were perfect!”
You might think about your keys as the reliable, 100% certain bedrock of your animation. In a swirl of a thousand frames, your keys are the one thing you can count on.
That feeling of certainty is an illusion, and it may be holding you back from the best animation you’ve ever made.

When you do each key, you make educated guesses about where all the different parts of your character’s body are going to be located at any given frame. These guesses might even be really good guesses! When you time out your keys and preview the animation, nothing looks outrageously wrong. That’s because your brain is pretty forgiving about filling in the missing motion, and if nothing is popping out of place, everything will seem fine.
But the truth comes out in the inbetweening.
Use Straight-Ahead Animation to Correct Your Keys
Every frame is a product of all the frames that came before. The momentum and weight flow from one frame to the next. Traditional animators flip and roll their drawings in close to realtime, and feel for how the forces build up and die down, just one frame at a time. (More on this “flipping” can be found here.)

Instead of treating your keys like untouchable, load-bearing pillars of your animation, use them merely as rough guides. Ghost or onion-skin your keys for reference, but work straight aheadWhen animating straight ahead, the animator draws one frame of the animation after another in order. Because the motion ... More. When you get to your next key, don’t just leave it because it’s already made. “Flip” the animation, ending on your current frame, and see how the momentum is flowing. Make changes where necessary to allow it all to flow. Shorten the playback range of your animation to 5-10 frames, ending on the frame you’re currently working on. Play this mini-flipbook *every few seconds* as you work — get as close as you can to the way traditional animators roll their drawings. Scrubbing the timeline or using the keyboard keys to go from frame to frame is usually not quick enough to check the motion in realtime.
[youtube]https://www.youtube.com/watch?v=InOqAqx3emo[/youtube]

Animator Mike Nguyen works straight-ahead, flipping and rolling constantly to get an intuitive feel for where each part of the character’s body should be at that one instant.

When you work straight-ahead, little nuances appear that you never anticipated during your pose planning: weight shifts, subtle anticipations, and overlapping actionDifferent elements of an object or body, come to a stop of different times. This usually happens because an attached, lo... More. You might be surprised to see how far off your “first guess” was from where the character’s foot or head is really supposed to be on the next frame. The wonderful thing is that as you can do this all by feel, just using your eyes as you flip a handful of frames at a time.
The conventional wisdom is that straight-ahead animation is only for fast, wild, unpredictable action; and pose-to-pose is for everything else. While it’s true that pose-to-pose doesn’t really work for some kinds of wild or fast action, there really aren’t any types of motion that a straight-ahead approach can’t improve. Pose-planning does give you a helpful structure; but the realtime feedback of flipping your animation refines this rough structure and adds the believability and realism that makes the finished animation feel truly alive. But in order for the straight-ahead magic to work, you have to be open to changing your keys or even remaking them from scratch. Stay flexible, and see what happens. 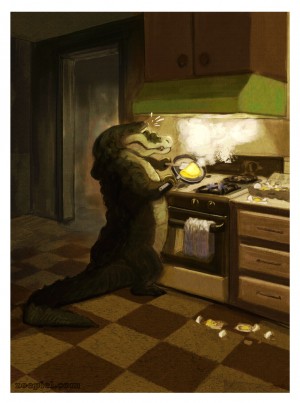 This guest post is by animator Zoe Piel. Her art, illustrations, and animation can be found on her blog here, and at http://www.zoepiel.com/ Big thanks to Zoe for her contributions!

Save How much free time do you have? If you’re anything like me, some days it feels like the answer is “None.” Life is so frantic and busy that zero minutes out of the day feel free at all. It’s…

Hello, the whole thing is a great advice thank you! I am going to try to do the straight ahead work next time. 🙂

It’s EXACTLY what i think , thank you very much!