Ideas – every creative has plenty of them constantly, but often when we need them most, we can’t get into the flow. In this article, I will present a method that can help you to get more ideas, more effectively, in less time. You can use it whenever you’re stuck with finding a title, character development, outlining scenes or even to create a complete story from scratch in only a few hours.

This article is based on a lecture by Kim Bjørnqvist, who worked for over 20 years in the Norwegian film industry developing internationally successful programs, movies and advertisements.

The basics of finding ideas

What is an idea? An idea by itself is worth nothing; it is useless if it doesn’t lead to anything – to an implementation or… more ideas. One idea can be one tiny little element of a bigger concept (like “In this world fish can fly”) or the complete premise of a whole movie (like “One day a fish starts trying to fly”).

Refining and fleshing out an idea is like building a staircase. You can only get higher step by step, and one step is based on the previous one. So we need to start with fifty random ideas:

But without having written down many, many options, you would never have a pool to select and be inspired from. To refine and combine. To get to the idea at the end of the staircase. So you need many, many ideas first to distill your final concept from. A funnel only works in one direction. 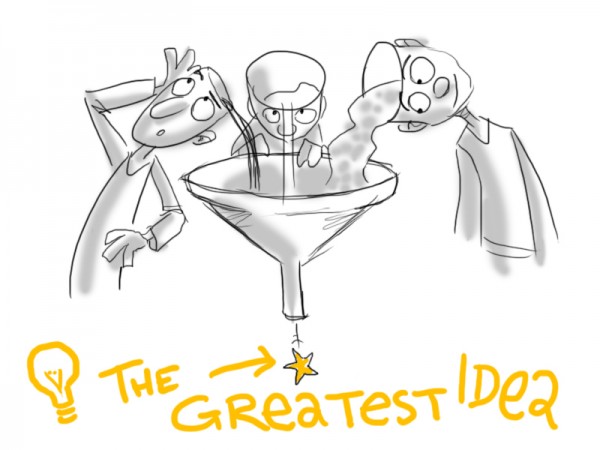 It’s important to understand what keeps us away from finding ideas and prevents a brainstorming session from getting into a productive flow. A typical reaction when we write down a first idea is to doubt it immediately. We think “Yes, but…” thoughts, which are idea killer number one. “Yes, but that’s too expensive”, “Yes, but that’s too hard to animate”, “Yes, but that’s too silly”, “Yes, but I am sure another person in my team has a better idea.” And we might be too shy to even write those ideas down. This is the problem. One silly idea might be the basis of another, more usable one. We need as many ideas as possible. We need a phase where we don’t listen to “Yes, buts…” 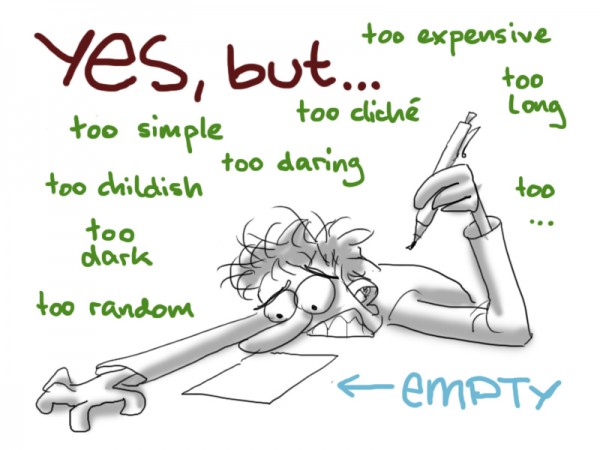 The technique I describe below gives you exactly these two conditions: It prevents you from doubting and judging your ideas in the beginning, and consequently, it gives you a big pool of ideas to construct whatever you are looking for.

First, gather up a bunch of Post-it Notes, find some friends or co-workers and a good writing area with ample available wall space. This works best in groups of five people or less. You can also do it alone, but it’s more productive with other people – and absolutely anyone willing to participate will do at this stage. Friends who have nothing to do with animation are very likely to bring really great input that you would never have thought of. Family who claims they “don’t have a creative bone in their body” provide you with insight you yourself might never consider.

The idea behind this process is simple: to write as many ideas down as you can (without giving any thought to whether they are “good” or not) in order to create a large collection that you can pick and choose from. This method is often used in several rounds to find ideas, from rough to detailed. To begin, you will pick a topic for the first round which could be anything – the title of the movie, a short description of a possible main character or a possible theme, even what TYPE of animation you want to produce – whatever you want to start with. It helps if you already have a general direction (like a target group or a theme) to get your brainstorming started – but of course, your first round also could be used to find a direction.

Everyone in your group gets a bunch of post-its and has to write down as many ideas as possible, one idea per post-it within a given time frame (5 minutes or so) with regard to the theme of the round. To prevent people from “censoring” their ideas, no one is allowed to talk or look at what the others are writing. When the time is up, everybody reads out their ideas and/or puts them up on a blank wall (windows work fine as well). 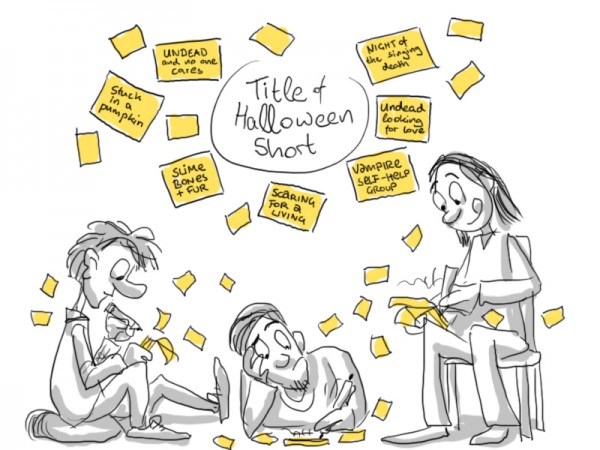 Now it’s tempting to start a discussion, but you might want to keep that to a minimum if you have more rounds to come. In any case, it’s a good idea to sort and group the ideas (you might have some fitting into the same category, some that are immediate favorites and some might not apply to this particular project). If you are lucky, the sorting reveals which idea you want to develop further. If not, you have to decide in a very brief discussion which idea you want to take. You might want to keep two or more ideas and dedicate separate follow-up rounds to each of them.

The subsequent rounds will spring from the ideas chosen in your first round. They can also go in any direction you would like, to help with any topic you want to flesh out. In the second round, you could brainstorm about what scenes might happen in a movie with the title/character/topic you just picked. In my opinion, if you are planning a story, you will eventually want to do rounds about possible scenes and plot points, as this method of group work is really beneficial in these areas. It works exactly like in the first round: everybody writes in silence as many ideas as possible and in the end you collect them on the wall. Remember, it really can be any association you have, whether it be a small detail that doesn’t drive the plot (e.g. James Bond sits at a bar, drinking a martini) or a big plot point (e.g James Bond’s lover turns out to be the villain’s wife). When you put them up on the wall you can begin to sort them with regard to what could be a beginning, a mid-point, a twist and an ending for your story.

Now, the rounds after could be anything that you want to develop further. You could pick three or four plot points (deciding what the main problem is, who the villain is, how the story starts and ends, etc.) and try to find scenes leading to and from these events. Or, if you think that you have enough crazy inspiration on the wall to work with, now is the time for discussions and to be realistic about what will work and how. 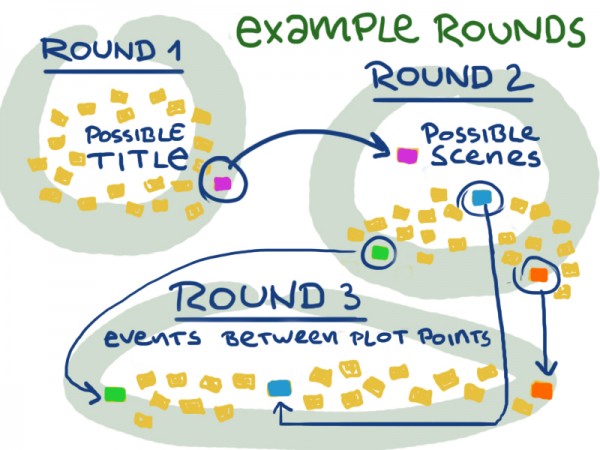 Usually one person has to lead the whole brainstorming session. Total democracy doesn’t work in the creative field, so it’s okay if the director just picks ideas, which feel the most promising to him or her. It works best if everyone is on the same level so nobody has to feel intimidated – the boss of a company, for example, should not write down his own ideas but just lead the session in a “now we do this, now we do that” manner. A higher level manager’s input could always feel more important and others might not dare to criticize it.

I have to admit, it might be difficult to see the benefits of this system just from the theory, and it feels a little awkward to set up a session for the first time, but whenever you are stuck in pre-production this can really help a lot. A post-it brainstorming session can bring you from the fear of empty paper to a wall full of inspiration in a surprisingly short amount of time!

Save Keeping with the Lessons From Zootopia theme from last week’s update, today we’ve got an exercise for you to tackle! After all, practice makes perfect. Save Share via:

Save Two “Studying the Masters” posts in a row?! Yes, despite normally spreading them out, today we’re going to take a look at another clip right on the heels of last week’s in order to contrast them and give you…

Rrr this is exactly what I needed two weeks ago! I ended up doing a brainstorming tree. Thanks for the idea and updating constantly every week.

I hardly think the people in charge of large studios need to sit around and think up ideas. People are very likely knocking down their doors to pitch to them. When I worked in a certain-large-name studio we just came in and did what we were told. The ideas were given to us, thinking not allowed.

In what position did you work there?
I liked the little studio I worked in for the last year, because everyone could give feedback to everyone else’s work and bring in some own ideas.
Sadly many big studios strictly seperate pre-production from production and if you are hired for the production part you naturally have no influence on the ideas. I am pretty sure most studios and TV channels have their own story departments, authors, content directors etc. (which use methods like this). Also, I doubt that individuals pitch ideas to the big studios, because they would get completely ripped off and loose all rights. I assume it’s more smaller companies in need of funding.

cherry on the cake I was just looking for some brainstorming concepts!

With a simple idea like ”a kid who want a loly-pop”, Wofaim is Building up my character. Once the character defined, the story come by itself 🙂

I used some of these ideas and they were very good! I think it would be nice to have one more article like this about how to come up with ideas for more! Do you have more ideas for how to think of ideas fo ranimation?