It is one of the first rules you learn when it comes to acting and storytelling: Scenes begin in the middle of your character’s life and his current situation! Whatever you let a character do, you have to look at it as only a small moment of a much longer existence.

This sounds logical and simple, but even experienced filmmakers sometimes overlook the possibilities of this golden rule, which is so important for the overall concept as well as every little movement in an animation.

Everything is based on something

A story, and every scene or shot of it, is just a short snippet of your character’s whole life. A whole life of experiences, dreams, disappointments, fears, feelings, thoughts, achievements, and so on. Everything that a character does is based on his or her personality and past and present influences. What you need to do in your animation is show these things in the character’s current behavior. 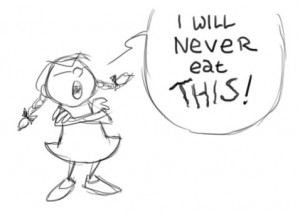 Imagine someone knocking on a door. If this someone hates talking to people because of countless bad experiences, he would knock differently than a very extroverted person visiting a friend. 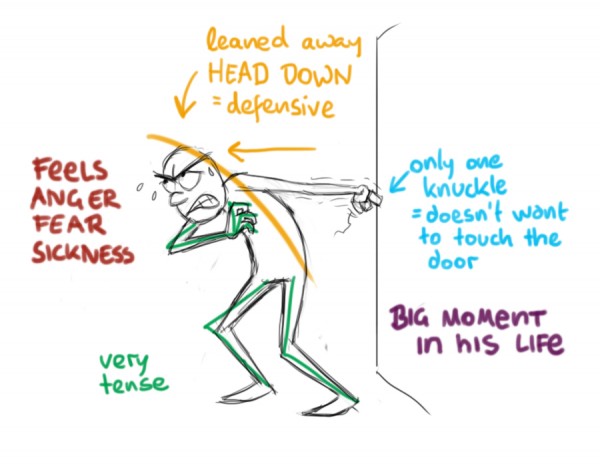 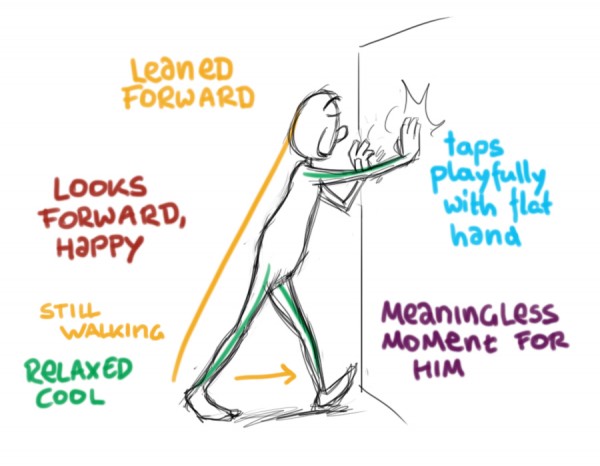 Or it could be an influence that just recently happened in the story, like a fight: 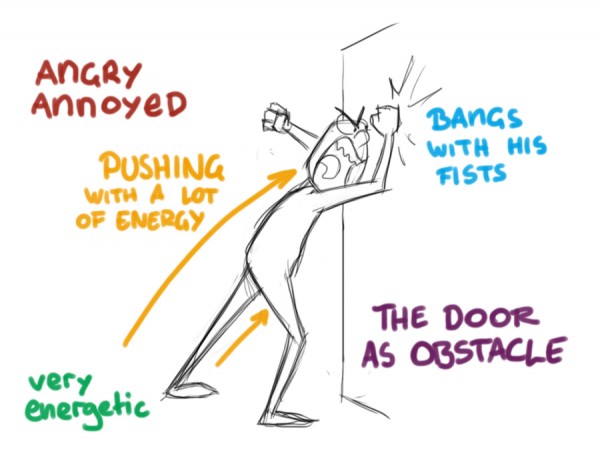 Keep in mind that we never move without a motivation. Everything we do is evoked by something – a thought, a feeling, an inner conflict. A different motivation also changes how we move. You should be able to ask your character in every frame: “What are you doing?” or even “Why are you doing it?” If you can’t find the answer in your drawing you should check if you are doing an acting mistake. Your character’s movements must be motivated, otherwise they will probably not be believable. 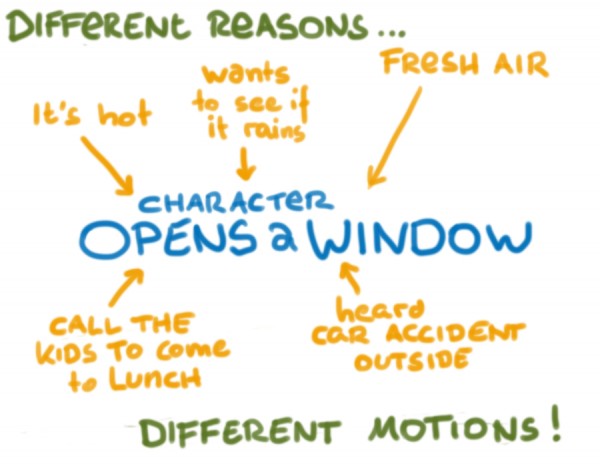 Consequently, you can’t let your characters do stuff just because it looks good. This is vital for staging! You couldn’t seat two people next to each other if they hate one another. One of them would get up and leave. It only would be believable if there were some seats between them, or if something was forcing them to be there together.

Also, our movie characters usually don’t know that there is a real world outside of their story world. For example, a character wouldn’t switch on a light so we can see him better, but because he wants to see better himself. He doesn’t know that we exist! Theater actors often have to fight with that rule because they have to do out-of-character movements (entering the stage, re-position so the audience can see a gesture better). 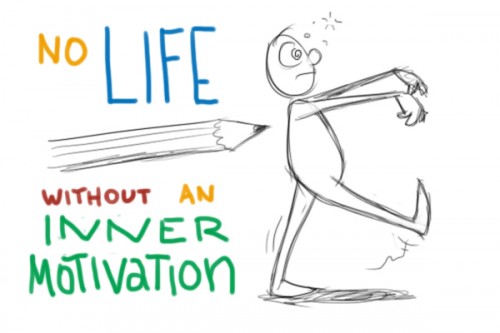 Everything your character does follows an inner motivation, from his mind, from his memory and habits, from his emotions. And it is an incredible feeling for you as the creator to realize that your invented character just made a decision on its own – you animated him that way because he wouldn’t want to move differently. If you feel like your character just had to act this way because there is no other way imaginable for him, you brought a consistent personality into existence!

This is a pretty deterministic philosophy if you think about it: Your character’s past experiences fully determine his next step. Of course, you can always put obstacles in your character’s way or force him into a challenge to make it more interesting. And keep in mind that it is expected for main characters to do stuff in the end that they would never have done in the beginning, because their adventure has changed them and their way of thinking.

Don’t make the mistake of explaining every motivation on screen. The audience will accept most of a character’s attitudes and tics if you just stay consistent and logical. The audience must feel that your character has reasons for behaving this or that way, but you don’t need to further explain it for them. It just helps you a lot while animating if you know exactly why your character’s acting a certain way.

Another important thing to look at, is that a story is never told continuously in real time. A lot of what your character does, is (and can be) cut out, because it is irrelevant for the story or can be reconstructed by your audience. Many storytellers don’t have faith in this last point, but in fact the imagination of the audience is one of the most powerful tools! You should use it, because it challenges your audience to actively deduce something. And that doesn’t need to be something complicated – use associations: 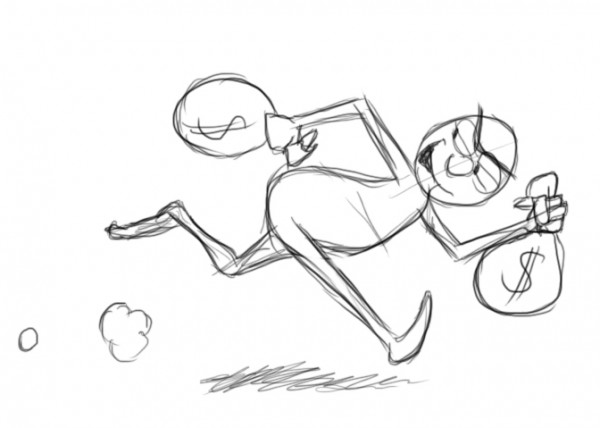 Although there is no real character design, you know what happened. This person is running away with money that is not his own. He probably robbed a bank and you know that just from how he is behaving. You even know that everything seems to go according to plan because of his smile. If his robbery is not going according to plan it would probably look more like this: 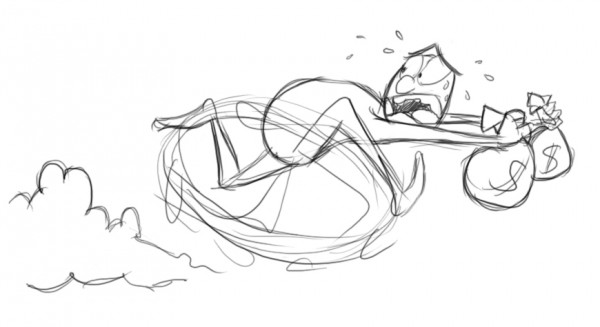 Isn’t it amazing how much information we can get from just one pose? Every single pose of your animation must be loaded with information about who your character is, as well as what he was doing before, what he is doing now, and what he is planning to do next. 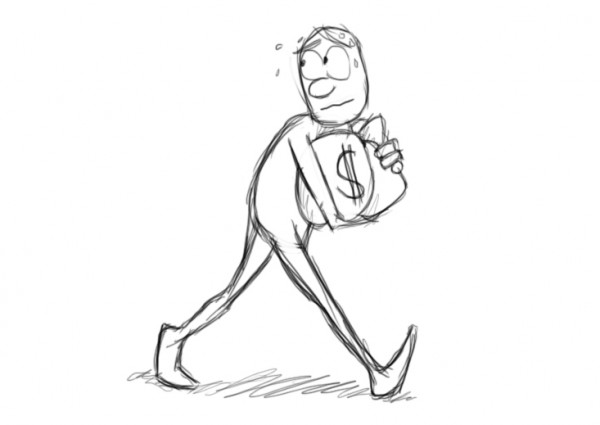 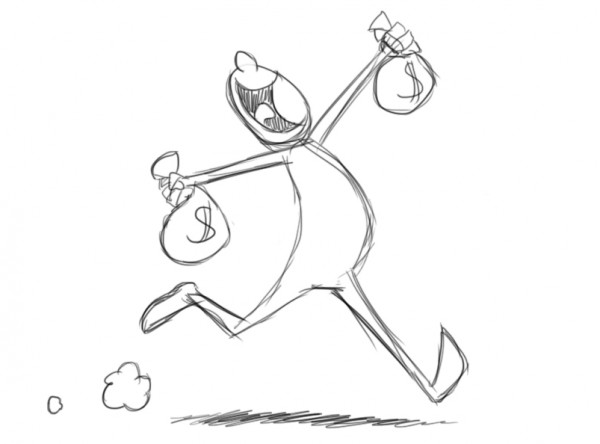 It is always the same basic thing: Someone carrying money across the screen. But there are so many different ways and reasons for it, which change the pose and every motion significantly.

Animating doesn’t just mean moving something, but filling those movements with meaning, a background story and an intention.

By loading the video, you agree to YouTube’s privacy policy.Learn more Load video Always unblock YouTube Are you using the placer (also called world node) of your 3D rigs correctly? Character animator Jacob Frey explains what this controller is for…

Save In my last eye article I stated that I was open for any questions about eyes in animation. And I got questions – a lot of them… Our reader Mahesh alone posted a ton of them and every single…

Save Quick tip today, but a very important one a lot of animators seem to miss! When you upload an animated clip specifically looking for a critique, you’d do well to export and upload in Quicktime format. Why? Read on!…

Hear hear. This is something so many foolish young animators do every time they do a shot, especially in their reels. They need to stop producing lifeless animated characters with no real brains. And then they wonder why they can’t get a job in the real world.

this article would help a lot of animators produce better work if they followed these simple but effective steps.

In 3D animatin its used 24fps, but always got confused about it because the standard for PAL is 25 fps and 30fps is NTSF. Would that change everything?

Not sure why you are asking under this article and what exactly you want to know. 24 fps is the standard for cinema. If you animated something in 24 fps and you just change the framerate to 30 fps without any conversion the picture is much faster than originally intended. NTSC is a nightmare video standard in general and actually the framerate is 29.97 fps. However video editing software can convert rendered footage into different video standards and maintain the original speed (though from and to NTSC is tricky).
I would advice you to work with HD standards and always choose 24 or 25 fps.
Fun fact: Many movies shot for PAL are a little longer in the cinema version, because they just let the film run 1 frame slower.

Very helpful thanks so much!

Great article, very informative. I hope it helps others like its helped me. Great job. To many characters are super shallow.

This reminds me a lot of this article: http://www.storyispromise.com/wchar.htm

Talking about how stories need characters that really live.

Cool link neil, and great article ferdinand! These ones on characters are my favorite so far.

You have no idea how helpful this is to me right now!!! I am working on a new scene and now I will think about this way. THANK YOU!!!