First of all, I’m not that old. But when you’ve been alive for three decades, you start to get the hankering to put on your old-man hat and talk about the good old days. And the truly older folks shake their head at you because “you don’t know anything yet, punk kid” and they’re totally right. At any rate, today we’ve simply got a fun little story about an experience I had while buying The Great Mouse Detective on Blu-ray…

Costco, for those who don’t know, is a buy-in-bulk type grocery store where one can walk away with 17 gallons of Extra Virgin Olive Oil for one low price. Well, it’s a low price if you divided it up into “the amount of olive oil a normal, sane person might need” which is not, ever, 17 gallons. But you think you’re getting something on the cheap.

“Hey!” you exclaim gleefully, “if I bought a reasonable amount of this stuff at the normal grocery store, I’d be paying almost 10 cents more for it! What a deal!” Then you take out a second mortgage to pay for the industrial drum of EVOO as you roll it to your car.

At any rate, Costco DOES offer some great deals on DVDs and Blu-ray discs, much of the time. A normal Disney film at Best Buy for $30 can be had for $24.99, sometimes even less if there’s an instant rebate involved. And on occasion they will simply want to rid their inventory of some particular movie, at which time prices drop through the floor.

That was the case when I stumbled upon The Great Mouse Detective on Blu-ray, perched happily on the shelf for $12. Twelve dollars for the movie that made me decide to become an animator? Score!

I joyfully took my film, along with my 12 pounds of Ramen noodles and, yes, drum of olive oil (which is what I actually went there for in the first place) to the cashier and waited as she rung up the customer in front of me. She was a younger woman, somewhere in her 20’s, and very cheerful. Noticing Basil of Bakerstreet on the conveyer belt, her eyes lit up as she proclaimed “Hey, I remember that movie!” 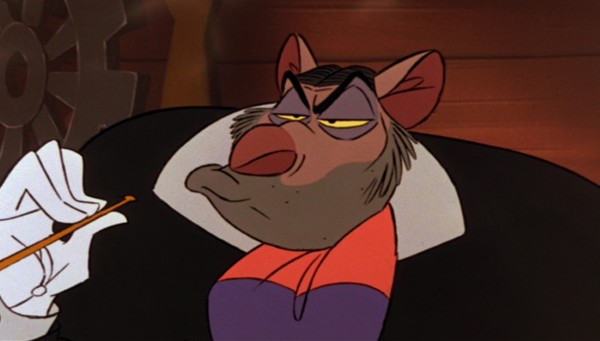 My earliest memory, really EVER, is sitting in a dark theater watching Basil race up the dangerous gears of a giant clock after the nefarious Professor Ratigan, fighting to save all of Mouse London. And while I can’t quite remember much about last week these days, let alone my childhood, I will never forget that magical moment when my tiny, undeveloped four year old mind decided “That’s what I want to do when I grow up.”

Now, chances are good at the time, being four years old, what I was planning for my future career was “Be a detective mouse who saves the world” and not “draw 100,000 pictures in sequence to manipulate people into thinking there is a living, breathing creature on screen,” but the decision stuck, and here I am nearly 30 years later surrounded by stack upon stack of pencil laden Ingram Bond 22 Pound Acme Punched paper.

Back to the present.

“Yeah… like me…” I smiled, remembering that fond memory and realizing that if the film was old, so was I.

The girl giggled at my joke that was not a joke at all.

“Oh, you’re not old!” she said as if that would make me feel better.

Granted, I don’t look old. I often get asked what grade I’m in, or at the very least if I’ve finished college yet. At that moment, though, I felt “all grown up.” It was the first time in my life where a youngster (a word I can now use, apparently) looked at something from my past and regarded it as ancient.

“They released that movie in theaters?!” The shock of the girl’s voice was like a dagger to my heart. 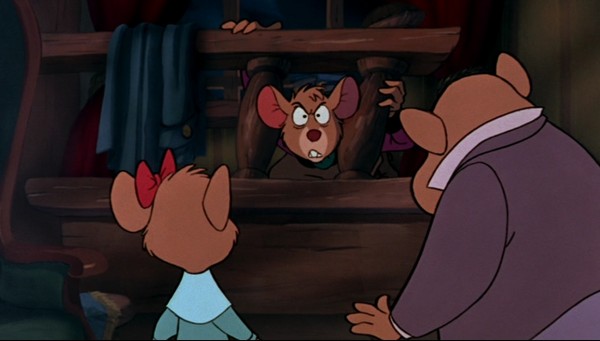 “YES” I wanted to scream “ONCE UPON A TIME THAT’S HOW YOU SAW MOVIES.” It didn’t occur to me until later that this is what we, the animation industry, have done to our youth. We’ve force fed them so many terrible direct-to-home-video films that they are incredulous when they learn the truth that direct-to-home-video was once not even a thing. (We also sit them in front of tiny screens that are also phones and have them watch feature films instead of on the big screen as the creators intended.) Still, The Great Mouse Detective (as rushed and under-budget as it was) does NOT belong in such a category, whether that category existed in the early 80s or not.

I’m not sure I remember my response to her surprise, though I’m sure I choked it out through gritted teeth. Unfortunately my torture had not yet ended.

“I saw Atlantis in theaters,” the tiny, innocent child who somehow is old enough to work at Costco explained. “I got really scared when The Guardian came on screen. My mom had to take me out of the theater. But I was really little.”

“Yeah, ha ha,” my wife no doubt noticed the wild, gloss-eyed look in my eyes as she began to pull me away, “The Leviathan.”

“THE LEVIATHAN, IT WAS CALLED THE LEVIATHAN!!” my inner animator screeched, seconds away from launching into a twenty minute long lecture about how that scene was created and the blending of 2D and 3D animation. 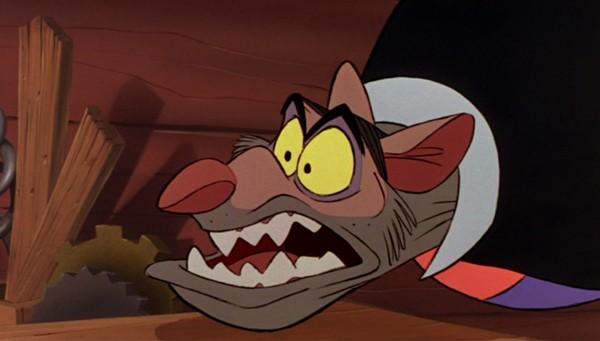 “Have a good night!” she cheerfully waved as I was dragged towards the exit.

“THE GREAT MOUSE DETECTIVE IS NOT OLD!” the silent ghost of my 2D-loving self cried, throwing over a giant stack of empty cardboard detergent boxes. “HAVE YOU EVER HEARD OF SNOW WHITE? OR PINOCCHIO?? THOSE ARE OLD ANIMATED FILMS! LET ME TELL YOU HOW THEY WERE MADE!”

The next moment I remember I was sitting at the steering wheel of my car, the engine idling in the cold air.

“Are you kidding me?” I wondered into the night, but this time out loud. I looked over at my wife. “ARE YOU KIDDING ME?! SHE DIDN’T KNOW IT WAS RELEASED IN THEATERS?! ATLANTIS SCARED HER WHEN SHE WAS LITTLE?!”

I’ll spare you the ranting and raving my dear spouse had to endure on the whole trip home (and half the night afterward) but needless to say, there are a few lessons to take away from this if you happen to be one of Animator Island’s younger readers:

1. In the “old days” movies were only released in theaters, because home video (at the time called “VHS” which is like a bulky, black DVD that could easily break) did not exist.

2. The beast that guarded the lost city of Atlantis was called The Leviathan.

3. Learn to recognize the glint in a 2D animator’s eye so that if you ever meet one you choose your words very carefully, lest you happen across one who does NOT have their not-insane spouse to pull them away from you when you try to “bond” over the story of how you watched Toy Story 2 in theaters “when you were really little.”

Next week we’ll return to our normal, helpful updates, but I hope you enjoyed this brief break with an amusing story from the real world.

Save Coupled with Wreck-It Ralph, Disney’s Paperman is the latest animated short from the House that Mickey Built. Combining the life and soul of 2D drawings with 3D models rendered in stylish black and white, does the short inspire confidence…

Save For people working in the visual media business there is next to no way around Adobe software. Now Adobe has announced that they will discontinue the traditional way of selling their products, leaving you no choice but to subscribe…

Save Recently the Twitter hashtag #yomommaanimation has become an online sensation, and animators from all across the globe have been creating some hilarious riffs! We’ve pulled together some of our favorites for a lighter update today; one that will hopefully…

Save Last time we looked at reasoning animators might consider giving up on 2D/Hand-drawn completely and moving on to the future that is 3D/CGI animation. Today we take a look at a few more of these ideas and conclude with…

Really funny story. I had one like that once where I almost lost it when some woman at the movie theater was complaining that I was too old to go see Monsters University. She talked like it was just for kids and as an animator I got so mad! How come people don’t know how much work it takes to make “cartoons”? It can be harder than a regular movie and it isn’t just for children!!

Thank you so much for this! I needed a good lighthearted laugh. The thing about Costco selling tubs of olive oil is so true too.

Hahaha! This was a great way to start my morning! XD

I’m only 25 and I feel ancient. The world is changing faster than I age.

I am going to at once to spank any person who says Atlantis is old!!!

Now I feel old too!

Wow…
i saw The Rescuers in theatre…
and i was… 11.
Does this makes you feel younger ?

Funny and well taught story, thanks.

*twiddles thumbs* How could she not know that The Great Mouse Detective was released in theaters? I thought only Gen Z don’t know these things…

I saw The Secret of Nimh in theaters. It’s still my most favorite movie of all time. 🙂