Last time in the FMX 2016 lecture series we discussed four story elements that help define your protagonist. For the next two articles, we’ll be focusing on a few things to keep in mind as you begin creating your story and your characters. The advice in this article is summarized and expanded upon from the FMX lectures given by USTAR Professor Craig Caldwell in his master class on story, and from speaker Christopher Lockhart (story editor at WME) in his lecture on cinematic stories. So, let’s get right into it with these quick and inspiring expert tips!

This is a fairly simply, but often understated point: You must love your characters in order write them well. One of the biggest things covered in the lecture was that, as story creators, we should always respect our characters and make them as smart as, if not smarter than, ourselves. This doesn’t mean that you should avoid making a ditzy or even outright “dumb” character, but that you have to do it with an understanding for who they are and why they are that way. To create a character who is unintelligent or unappealing simply to make fun of them, to get laughs, or to force a new element into the story is committing a literary sin. Even your most despicable villain needs to be “loved” by you – that is, he/she can make you feel sick to your stomach, but you better be taking them seriously as a full and complete character. If you can’t do this, it will come across in your final product, guaranteed. If your don’t believe me, just think for a few minutes about those stories with characters you love – how they act, how the talk, the tiny details of their movements – and then think about those stories with unbelievable, forced feeling characters – what was lacking or overdone in their behavior? About 90% of the time, they’re so unlikable because the author’s heart just wasn’t in them. It’s not that they are impossible to write. They just weren’t taken seriously. 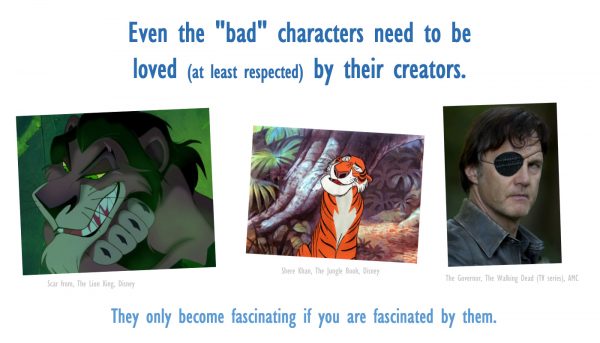 Even static characters can create change

The protagonist – usually the main character – of a story must create some sort of change either in the world around them or within themselves. At least, this is what usually happens. This is typically the development of the character arc we talked about in our previous article. However, one of the most eye-opening points I took away from this lecture is that the change that is created can actually be a change that the protagonist causes within those around him. The example given was of Wall-E, who is a sweet, innocent character and seems to have no real character arc – that is, he pretty much stays true to himself through the film – but he influences Eva to change. She starts out as a distant and calculating machine, seeking only to complete her mission, but develops more and more of a soft and caring, human-like side as her interactions with Wall-E continue. So even though Wall-E is the protagonist, it is Eva who has a developing character arc as a result of befriending him. Maybe that sounds obvious to some of you, but I personally had never thought of it that way before. We’re so used to hearing that protagonists have to develop and change throughout the course of the story, that such a twist seems uniquely refreshing.

This one might seem simple: character opposites create drama. If you’ve studied anything in the direction of creative writing or storytelling, you’ve undoubtedly learned that dynamic groups of characters are essential for creating interesting stories. That is, characters that have strong differences in their personalities, backstories, etc. play well off one another. After all, how can you make a drama or comedy out of characters that all think and act them same? A good way to get started with creating your dynamic group is to just start making lists. Try creating pairs of exact opposites and see what kind of stories you could get from them. What about a poor farmer and a rich business man? Or an honest, hard working single mom and a shameless, pampered housewife? You can find many examples of such opposite pairings in popular films and books: just think of Carl and Russell from Up or Will Turner and Jack Sparrow in Pirates of the Caribbean or Cosmo and Wanda from the Fairly Odd Parents. But this kind of opposite pairing needn’t even be between two characters – it can be one character placed into a situation or environment that represents the opposite of what they are. Just think about Wreck it Ralph entering Sugar Rush. He couldn’t get much more out of place, and this placement creates a tension that helps to drive his story. What’s important is that you create a dynamic element that your characters need to respond to.

A weak antagonist = a weak protagonist

We touched upon the role an antagonist plays in defining your protagonist in our previous article, but I’d like to emphasize the importance of the antagonist-protagonist relationship a bit more. Basically, you should have an antagonist that is a fair match for your protagonist. If you do not build up the conflict brought about by the antagonistic forces facing your characters, then you are cheapening them and cheating your audience, as well. If the struggle is too easy, the solution too random, or your character doesn’t change or need to make a difficult call in the process of overcoming his/her challenges, then you need to raise the stakes. A protagonist is only as strong as the forces he/she faces. So don’t skimp on the time you’re investing into the development your antagonists. Remember, they are just as important to your story as your heros. Of course, it also does no good if the antagonist is too strong… If you need an example, think of DreamWorks Megamind: the story wouldn’t have worked if we had simply seen Metroman facing off against Megamind the whole time because they clearly weren’t evenly matched – it was just too easy for Metroman (our antagonist) to win. It is only when Titan is created that there is a real struggle between pro- and antagonist, and thus a real story to follow.

Alright, that was it for this this week’s article! We’ll be continuing this series soon with more advice from more amazing speakers. I hope you’ve enjoyed it so far! Here’s a preview of what’s to come:

Thank you all for the love you’ve shown for our latest articles and videos, we really appreciate it. And thanks as always for liking, sharing, subscribing, and commenting. Write you soon!