It’s time for the grand finale of our posing series. So far we had a very microscopic look on how to improve one single pose, but we should never forget that we always have a whole bunch of poses in a row that make one continuous animation and often times more than one character. This article is about how you connect poses in time, use impulses to get from one position to another and make sure the whole sequence is readable and interesting to look at.

So far we looked at how a the laws of physic and a character’s inner motivation must be considered in the posing process in part 1 and learned some guidelines to improve the visual appeal.

The first article already mentioned that one pose is just a snippet from a larger context. The contextual elements we covered so far were:

But there is more that we have to consider if we take into account that during a single scene our characters have to go through a range of different poses. And for deciding how pose A should be different from pose B, just knowing the character’s childhood is not precise enough. So, what do you need to know to come up with a good sequence of poses?

What is the small action that your character is doing at this very moment? This is more complicated as it sounds. Let`s say he is holding a whiskey glass. Sure, we can and have to deduce a lot from what we know about him (a gangster boss would hold the glass differently than a nerd who hates parties). But a lot of it comes from within the scene: Your character needs a reason to pick up the class (thirst, drinking to forget, or maybe he just plays around with it lost in thoughts). These impulses come from the moment and can change drastically and develop during the scene.

Let’s say our character usually doesn’t drink alcohol (background information) but he has to be polite and take a sip because it has been offered to him by his boss. He doesn’t like the whiskey at all, but he has to hide that, because they are talking about his promotion. 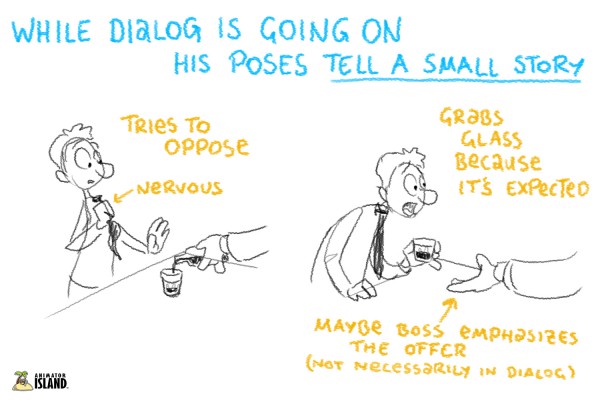 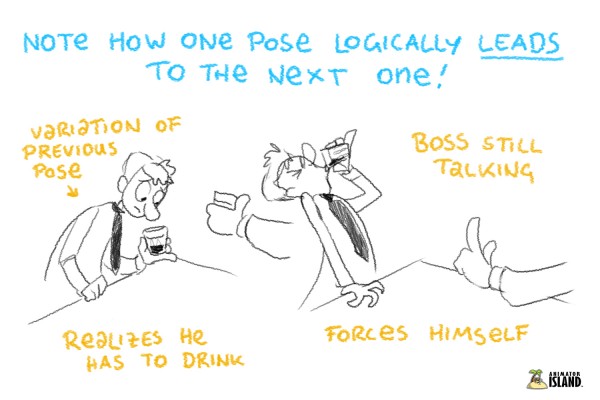 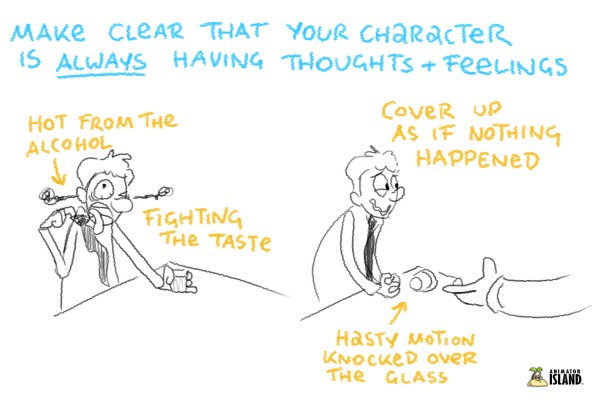 You see, while the background story might be that he wanted this promotion all life long and this might stay his main objective throughout all of his scenes, it’s really those mini-objectives (forcing himself to drink, hiding his disgust) that dictate from what pose he gets to what next pose. Its almost like a mini story. We never get far away from storytelling theory and the challenge of believable acting when it comes to set a row of poses. Every pose must have a justification and be a development of some kind from the previous one. Even if something unexpected happens, the previous pose must make clear that he didn’t expect it. Setting mini-objectives and little secondary events are the perfect device for believable acting and generating a whole sequence of poses really easily. That an action must have a purpose and reason, is acting rule number one. And it’s important to realize that this does not only mean the big goal (promotion) but such small things as “why does he grab the glass in front of him?”. At any time a character should be able to answer the question “what are you doing?” – and the answer can be as unspectacular as “I am listening to another person and my elbow itches, so I scratch it”.

(Usually) a scene is a negotiation – meaning there is a more or less visible argument going on (internal or with other characters), which is, of course, reflected in the pose. This fight has a progression. Make sure this moment where the negotiation has its turning point is visible in your poses. 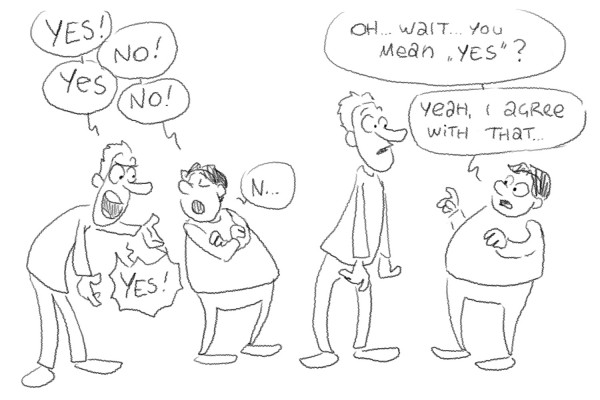 If there are other characters in the scene, it’s even more complex. Again we have to lend a tool from acting to stage and pose characters correctly, called “status transaction”. We humans constantly try to position ourselves in a hierarchy; it`s all about loosing and winning, being better and respecting or disrespecting somebody’s status. Ans this shows in the pose… who is dominant? Who is submissive? Does it change during the scene or story? And here is a little trap for you: Showing a servant, bowing down submissively in front of a king is a perfect display of status, but not necessarily good acting. Don’t forget the mini-objectives we talked about earlier. Is the king bored by his servant? Does he even pay attention to him? Does the servant really admire the king or his he afraid and just wants to get out? These are the aspects that will make the poses and facial expressions really meaningful. Be aware that it is not necessarily the posture where the characters show their status. Eye contact is one of the most valuable tools if two or more characters are in the room. Make sure your poses and the timing support your viewer in reading important facial expressions. A short shy glance or an intensive stare with an eye twitch can do so much more for you than the dialog or a stereotypical posture.

Oh, and just because I saw so many 11secondclub animations recently, where the characters push each other around, put hands on shoulders, grab another persons arm, face and whatnot. How much do you usually touch other people in everyday life? Not at all, I bet, except for greeting gestures. If we touch or even grab somebody, we cross a line: to comfort, to attack, to hold back. All very strong actions that we would only ever do with a strong reason. The hand on the shoulder means something! Don’t do it just to show that you can animate it.

Of course there are also timing and aesthetic aspects that influence what poses you can put in a row. The most obvious rule is often violated by beginners: Drastically different poses need time to leave the right impression. If a character just jumps through poses (back and forth, right and left) in a short amount of time it tends to overwhelm and annoy the viewer – no matter how good your poses are, they don’t leave an impression. Do fewer, but better better poses! Don’t ry to cover up bad poses by putting in more of them. 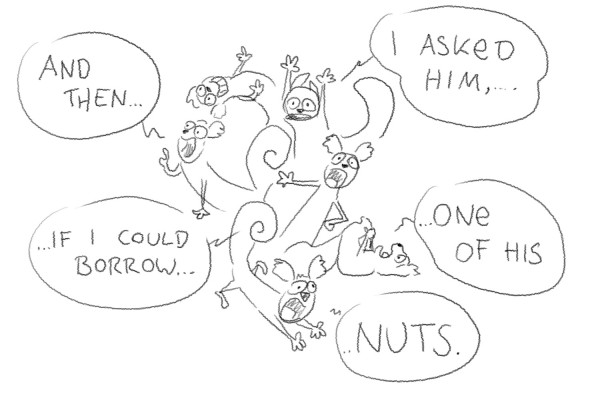 Hand-pick your poses use very carefully and only switch when there is a reason to do so (if there is none your character is just nervously twitching around). If a character drastically changes his posture there must be something that calls for this – a new objective, a change of heart, something that really needs to be emphasized.

The best way to find out the timing for your poses, is acting them out yourself. If you learn to listen to your impulses it will give you valuable information for timing and more believable acting. If you can make yourself feel and move how your characters would, you can then transfer it onto your animation.

When you have more or less figured out what the poses of your sequence are going to be, you can start bringing out their visual appeal. Contrast is a strong visual device that you should use to spice up your animation – just don’t force it. As you see in this example, I tried to break as many similarities in the pose as possible. However these poses are still connected as a natural progress and the snappy pose is enforced by the dialog. 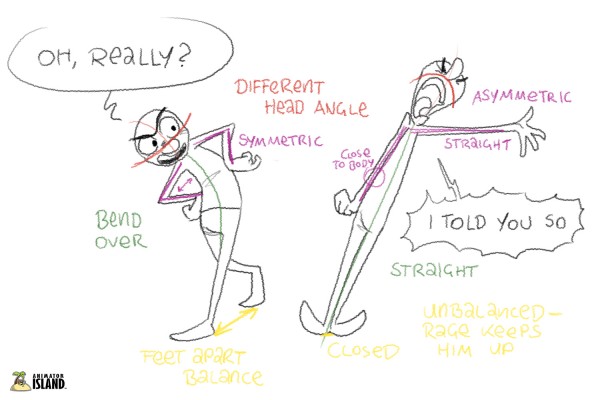 Contrast doesn’t mean that the poses have to be drastically different. Look how this is a rather small change but still there are some details that change to indicate that something is going on. 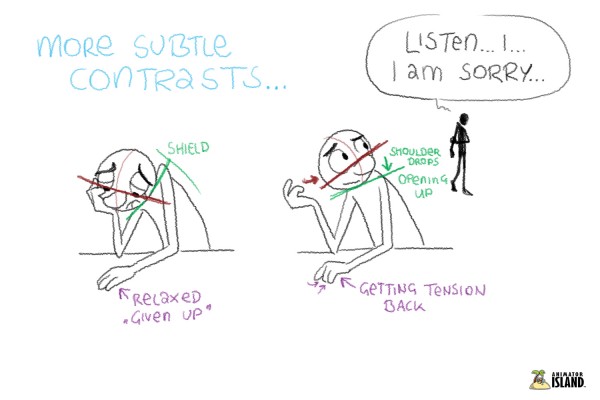 Vary the angles for the shoulders, head and hips from pose to poseWhen animating pose to pose, the animator defines the most important poses first (e.g. key poses), then the second most ... More (especially when it is supported by a motivation) to keep things interesting over time. Break them drastically for very dynamic moments. 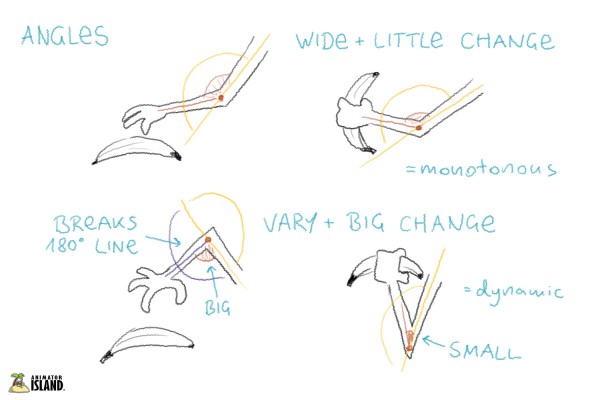 As you can see this topic is slipping more and more into other areas of design, acting, timing and storytelling, but that is only logical since it all comes together in well-crafted poses as the tip of the iceberg. Carefully arranging the poses along the timeline to give them an interesting, meaningful structure in a visually appealing way – therein lies the essence of good animation. The progression of the poses should create something that cannot be found in the single picture alone. 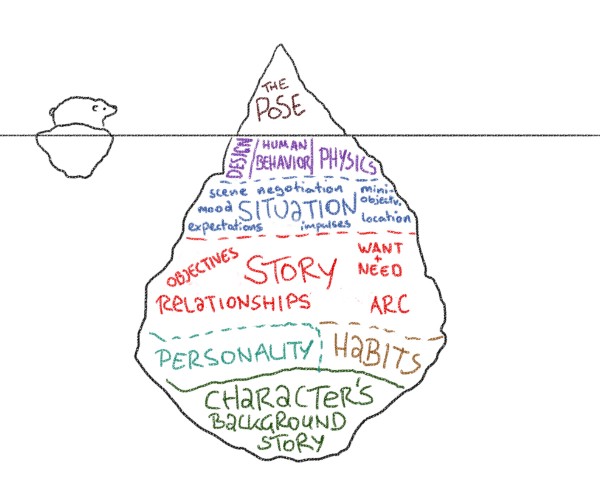 The most important tip I want to give you on how to do posing: First, forget everything I said in this monster-sized series (after a while the basic rules will just be in your blood anyway). Shoot references, do hundreds of thumbnails – you will do stuff intuitively that you would never have thought of. Don’t be afraid to draw bad poses – make mistakes, thousands of them, they will lead to the what you were looking for. When you have a pool of possibilities it’s time to start selecting – analyze what your brainstorm material offers to you and what the scene needs, now you can consider all the rules and theories. Often you only have to bring out and tweak some aspects to make your poses shine more. Always look for the extra push that makes your them stronger, more meaningful and more appealing.

Great article! One of my favorites.:) Loved the picture with the iceberg – it’s all true!

Great article it was very helpful!

Great Article, Great website, since I discover, I come here every day *-*

You are really great…i have learnt a lot in a shortwhile here…i have a question(please,anyone can answer it)what about drawing from life,can it boost the way one draws powerful and energetic poses?…thanks

It sure can! But you have to be looking at it the right way. You want to push your poses when drawing from life, and try to improve them as you go. There’s a simplistic article about it here: https://www.animatorisland.com/defining-the-art-gesture-drawing/ and beyond that we’re actually working on something a bit more detailed and advanced on that very topic, so stay tuned! 🙂

Thank you so much J.K riki..and thanks for the link…KEEP THE POSTS COMING!!!

I think this is my favorite series you guys do here. I hope you do more.

And so goes animation! XD

This is my favorite series I learned so much! Thank you!

Loved this series!!! I’m not to impressed by grammar police but a re-read and corrections would help smooth this article out a little… Thanks for sharing! Can’t wait to read more : )