To conclude his wonderful series on Animation Physics, professor Alejandro Garcia takes a look at one of the most known principles in physics: Action-Reaction. This article clears up some common misconceptions and helps you to add some punch to your animation (one that creates a proper reaction that is).

It’s now time to finish this series with a discussion of:

The principle of Action-Reaction, also known as Newton’s Third Law, tells us that when a character interacts with an object (or with another character) both are affected. Paul Hewitt poetically describes this as, “You cannot touch without being touched.”

The traditional statement of the principle is: “For every action there is an equal and opposite reaction.” Personally, I find this phrase confusing (What counts as an action? How can two things be equal if they’re opposite?). A better way of stating it is:

Let’s consider each part of this statement. First, the action and the reaction are always a pair of matched forces; if the action force is exerted by A on B then the reaction force is exerted by B on A. For example, suppose boxer A punches boxer B, as illustrated below. You can say that the action is the force of boxer A’s fist hitting boxer B’s face with the reaction being the force of boxer B’s face pushing back on boxer A’s fist. By the way, it doesn’t matter which force is labeled “action” and which one is “reaction”; you can always switch the names if you want. 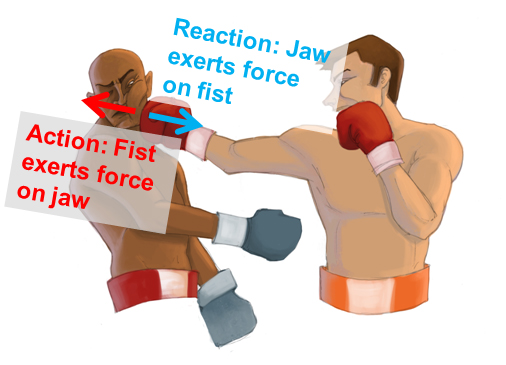 Second, these two forces are instantaneous so if boxer B punches back that’s not the reaction, that’s a new action. Third, if boxer A punches with 100 pounds of force towards the left then there’s an equal force of 100 pounds on his fist towards the right. Since forces change momentum (see the Principle of Momentum and Force) the action force causes the boxer B’s head to start moving towards the left while the reaction force changes the momentum of boxer A’s fist, possibly bringing it to a stop. To animate this scene successfully it’s essential to match the action and reaction. A common mistake is to focus on animating boxer B’s motion while neglecting the reaction force that must simultaneously be acting on boxer A.

Applying the Principle of Action-Reaction is complicated by the fact that there are usually several action forces to be considered. Take the simple case of a man pushing a rock, as illustrated below. The man exerts a force on the rock so the rock exerts a force back on him. If he was on roller skates he’d move backwards. But he’s barefoot so there’s another set of action-reaction forces: he also pushes back on the ground and the ground pushes him forward. In order for him to push the rock towards screen-right the force exerted by his legs cannot be less than the force exerted by his arms. These actions and reactions have to appear to match in order to animate this scene believably. 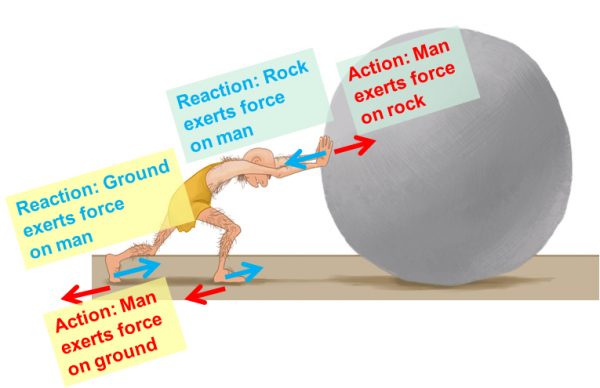 Let’s use the Principle of Action-Reaction to analyze a shot from Madagascar 3, shown below. In this shot Gia the Jaguar is pulling Alex the Lion into the train car. Let’s focus on the forces exerted by Gia and on Gia. Because she is exerting an action force on Alex there’s an equally large reaction force pulling her towards the outside of the car (even if Alex is just passively holding his arm out to her). To stay in the train car, Gia pushes down and towards screen left with her feet; the resulting reaction force pushes her towards the inside of the car. If the two reaction forces on Gia plus the force of gravity (her weight) are in balance (i.e., sum to zero net force) then her center of gravity won’t move. If those three forces do not balance then she’ll either be pulled out of the car or fall backwards into the car. Watch the film and you’ll see that the animator successfully made this shot look physically believable through Gia’s posing and acting. 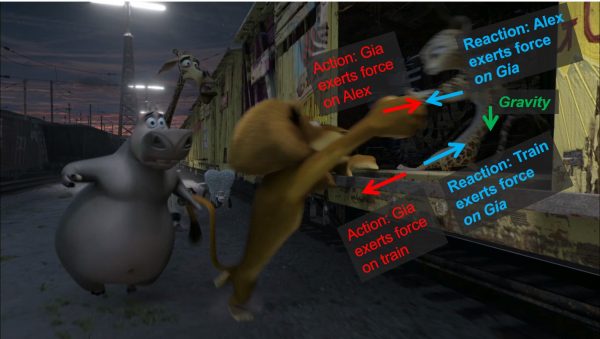 This escape sequence in Madagascar 3 has dramatic tension and it’s in such cases that the director usually the action to be physically believable. On the other hand, there are many situations in which the Principle of Action-Reaction is violated, both in animated and live-action films. For example, a hero may deliver powerful punches with negligible recoil while the villain goes flying backwards (pulled by a wire harness in live-action or in motion capture). This may be done for dramatic effect (to make the hero look exceptional) or for comic effect (making it obviously fake in order to defuse the violence). However, in other situations there’s a chance of shattering the audience’s suspension of disbelief if the violation of the principle is unintentional and unexpected. So if you break the rules, know that you’re doing it and break them for a reason.

That concludes this series on the Principles of Animation Physics; hope you found it useful and interesting. See you at the movies!

Thank you for this amazing series of posts! I learned a lot and whenever possible, I read again!