Did you know that moving with or against gravity actually causes weight gain and loss? It’s time for another Principle of Animation Physics defined by Professor Alejandro Garcia.

Normally we think of our weight as being more or less constant; maybe you can lose a few pounds (or kilograms) if you go on a diet. However, when a character is moving its effective weight can be constantly changing. Specifically, if the character is: 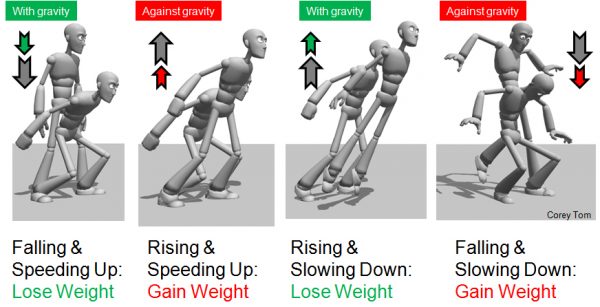 In brief, if you’re going against gravity (rising but speeding up or falling but slowing down) then you gain weight but if you’re going with gravity (rising & slowing down or falling & speeding up) then you lose weight. The greater the acceleration, the greater the variation in the weight. An extremeAn extreme keyframe is the moment where a change in direction occurs. Anticipation and Overshoots are Extremes, because ... More case is when a character is in free-fall and becomes weightless; search online for videos of the Vomit Comet to see what I mean.

You can feel these variations of weight by taking a heavy object in your hand, say a dumbbell, and accelerating it up and down. By the way, if your physics friends question this weight gain and loss just tell them that in animation you’re working in a non-inertial frame of reference.

So why is this important? As a character moves (walks, runs, jumps, etc.) the changes in weight create many overlapping actions in the movement of hair, clothing, and flesh. Losing weight causes these to seem light, almost buoyant, while gaining weight pulls them downward (see Gloria’s butt in the screen shots below). Poorly animated characters sometimes look floaty as they move because their overlapping actions lack this variation in effective weight. At DreamWorks this important element is often handled by the animators in the Character Effects (or CFX) department.

Richard Williams calls this variation in weight the “counteraction.” In The Animator’s Survival Kit he writes, “When the character (accelerates) up – the drapery or hair or soft bits go down.” The illustration below, taken from that classic book, illustrates his point. It’s important to remember that it’s not just the direction of the motion but whether it’s going with gravity (e.g., downward and speeding) or against gravity (e.g., downward and slowing). 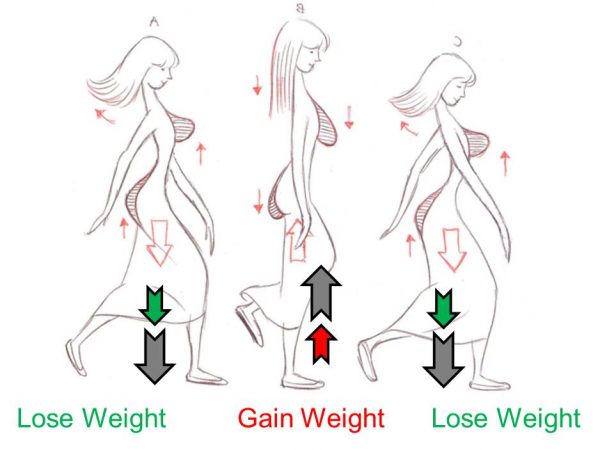 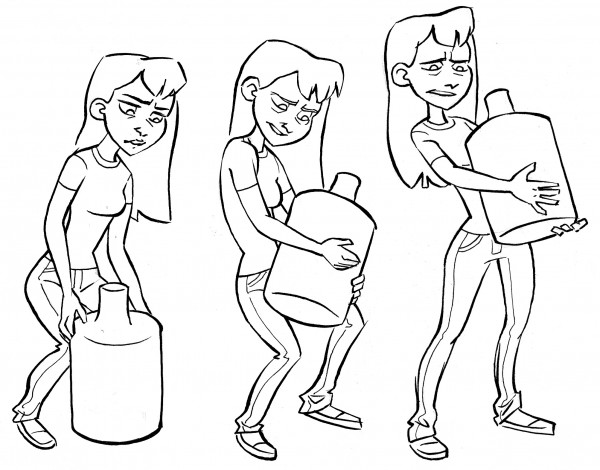 For our final example let’s look at a walk cycle in more detail. The graph below shows the weight shift during a walk cycle as measured in the laboratory. The red and blue curves show the weight on the left and right feet; horizontal dashed line is the total resting weight (about 170 pounds). Weight shifts from one foot to the other and the two curves intersect where weight is transferred from the back (left) foot to the front (right) foot during the contact pose, when the feet are farthest apart. Notice that the weight varies significantly during the cycle, ranging from about 220 pounds down to 140 pounds. 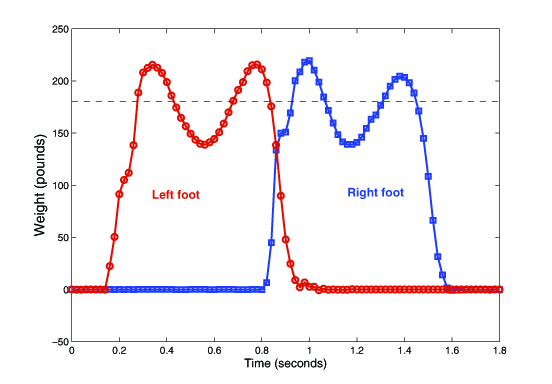 The dips in the weight occur during the passing position as the lifted leg passes under the body. During the passing position a person’s motion normally goes with gravity, that is, slows while rising and then speeds while falling. The spikes in the weight occur in the contact pose. One of the weight spikes is on the back (left) foot just before the heel strike of the front foot; at that point the character’s bent knee is straightening out, slowing the fall. The other weight spike is on the front (right) foot just as the back foot leaves the ground. This is when the character is starting to rise out of the contact pose to enter the passing position.

The data in the graph above is for an average walk (about one second per cycle). For slower walks the weight variations are smaller; for very slow walks the weight on the planted foot is nearly constant (and equal to the resting weight) from heel strike to toe lift. For fast walks the weight can vary dramatically, dipping to almost zero during the passing position and spiking to over twice the normal weight around the contact pose. In that case the weight variations are very noticeable in the overlapping actionDifferent elements of an object or body, come to a stop of different times. This usually happens because an attached, lo... More of the character’s hair, clothes, flesh, etc.

The weight variation may be different if the character walks with “personality” (peppy, sneaky, cautious, etc.). In the Richard Williams walk presented earlier the character has a snappy rising motion in the passing position so there’s weight gain instead of weight loss in that pose. Each walk is unique but the physics principle is the always same. So if you want believable overlapping actionDifferent elements of an object or body, come to a stop of different times. This usually happens because an attached, lo... More be sure to match the weight gain and loss to how the character is moving up and down.

That’s all for this time. In the next article we’ll finish the series with the final principle: Action-Reaction. Look for that article appearing in the near future here on Animator Island. See you then! 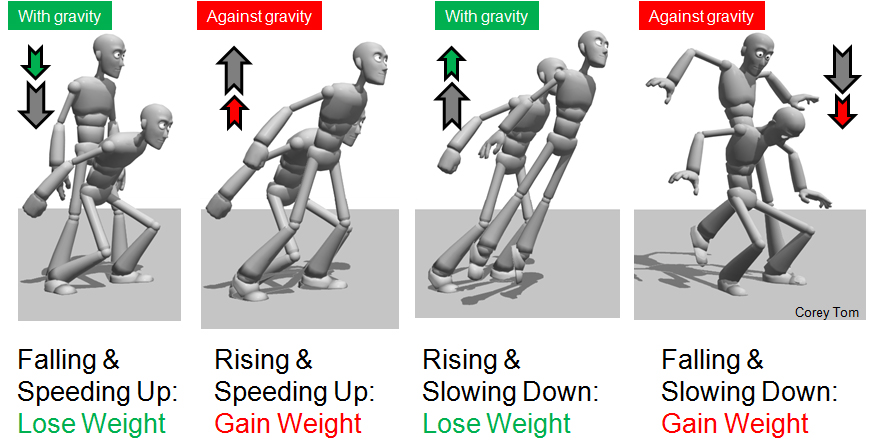 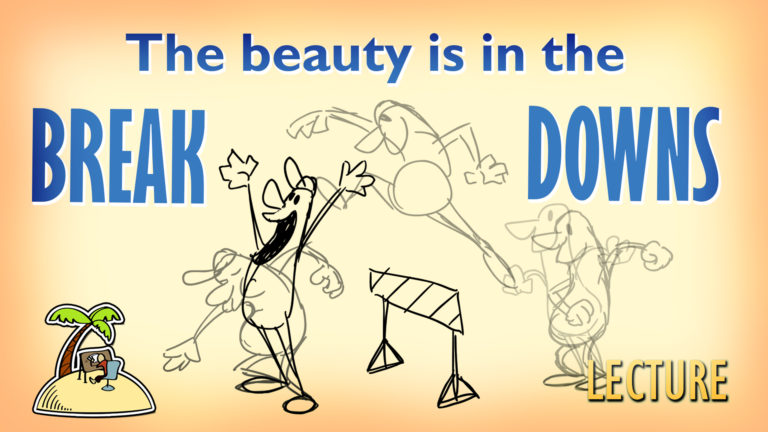 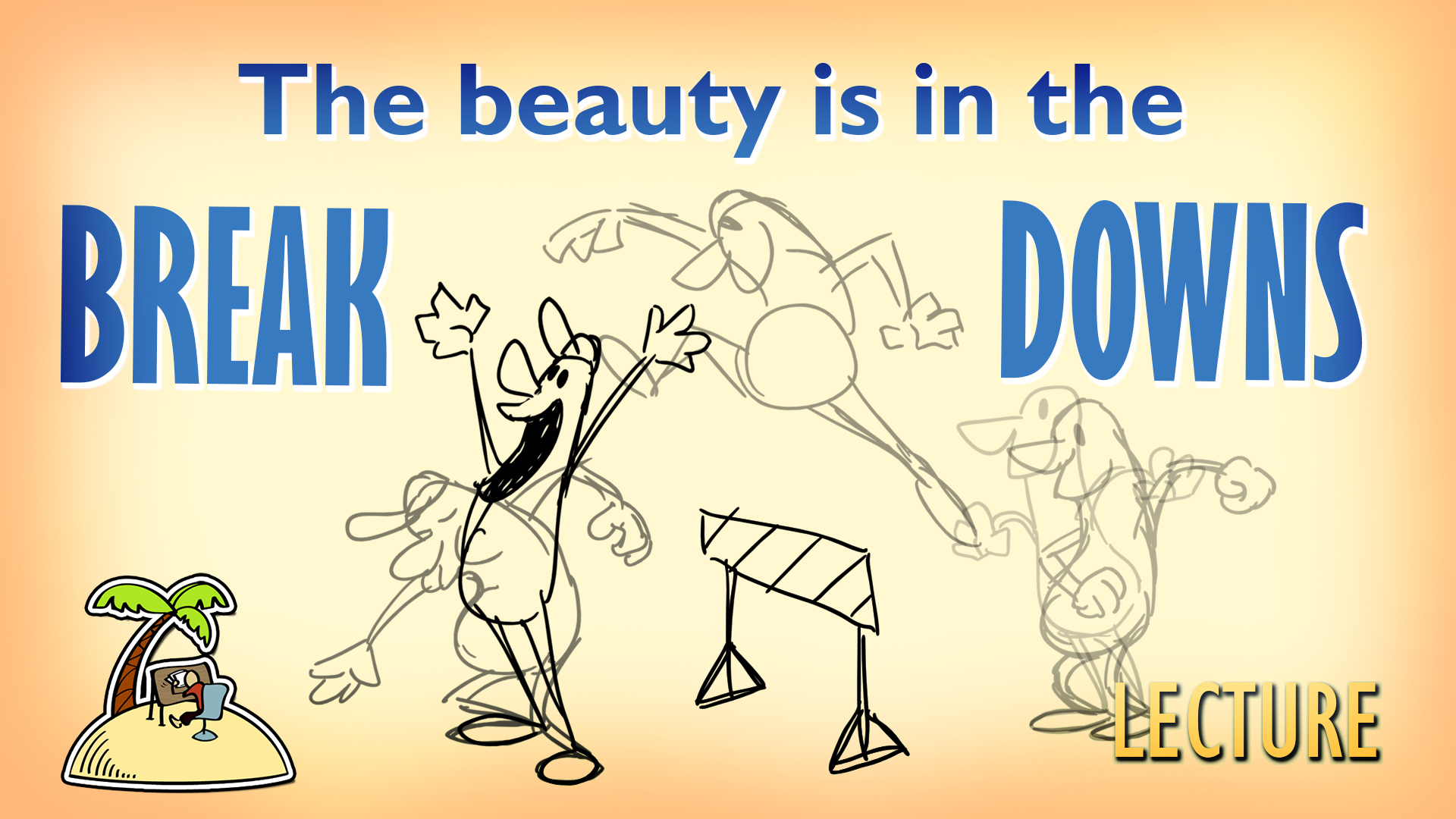 Great article! I learned a lot. Thanks for posting it 🙂