An unfortunate stereotype is that “Cartoons are for kids.” This point of view certainly exists in the United States, but thankfully many other countries do not share the same perspective. Enter Arrugas, from Spanish Perro Verde Films and Cromosoma, based on a comic from Paco Roca. While animated, this film is absolutely NOT for kids. Actually quite the opposite…

Arrugas (Spanish for “wrinkles”) is a story set in a retirement home. It follows the journey of newcomer Emilio, a former bank manager, and his new roommate Miguel who has been there two years and knows the place top to bottom. Emilio is in the early stages of Alzheimer’s, but not so far along to be banished “upstairs” which is where the most mentally impaired patients live. 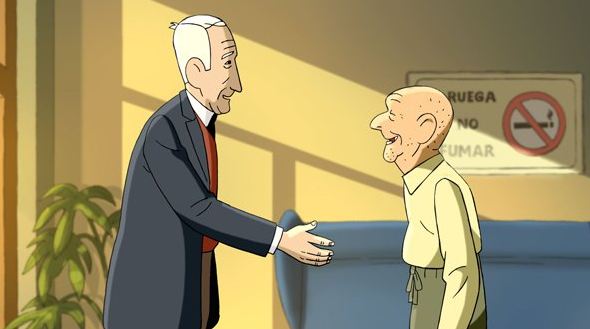 We get to know several other characters in the home through the cons of Miguel, who knows each elderly person’s delusions and takes advantage of them. One woman believes she is on a train to Istanbul, so Miguel appears as a conductor to take her train fee. Another woman feels she is there by mistake and wants to call her sons to pick her up, so Miguel charges a phone fee and sets her off in a random direction to make the call that never happens.

The story is so rich and deep, while remaining completely accessible, that describing it in full would take nearly the same amount of time as watching it. There is nothing wasted here, and each encounter and scene serves a purpose in weaving the tale, a feat many, many films have difficulty with. It is like reading a novel with no fluff, only the words necessary to progress the story. In a sea of movies that contain nearly ALL fluff, that is a breath of fresh air. 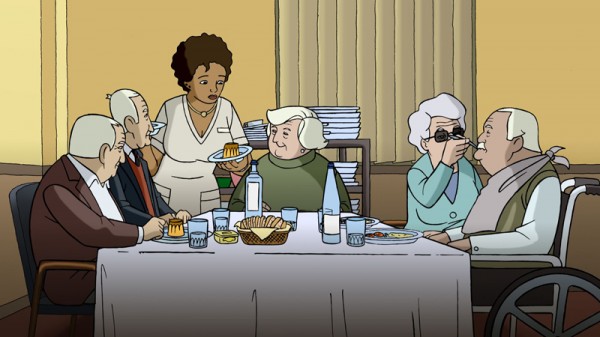 Don’t get me wrong, I like a mindless action flick or lighthearted comedy as much as the next person, and truthfully dramas are not normally my style. Arrugas blends lightness and its heavy messages beautifully, so that you walk away at once lifted but also very grounded to earth. Despite having a very clear point of view, the filmmakers never hit you over the head with their theme (something that I felt the recent animated Brave did frequently). It’s a smart, thought-provoking journey that can leave you slightly different than when you walked into the theater, if you let it.

What spoke to me most as an animator after watching Arrugas was just how particularly snobbish I can be when it comes to our art medium. I tend to leave a theater filled with comments of “The animation was well done in most places, but such and such scene was terribly composed” or “This or that character’s design severely lacked appeal, I don’t know what they were thinking.” When it comes to art style and animation, I do not give many free passes.

Yet here was a film so rich and deep in substance that each time I caught myself thinking “What a boring set layout that shot is” I was instantly reminded that perfect fluidity and jaw-dropping backgrounds were not what this film was about. The art style was acceptable; lovely at times in many of the character designs. The animation did just enough to deliver the story, no more no less. I’m not sure I saw a single scene that was not either a full side-view or a straight on shot. And in most cases I would leave a film like that thinking they needed to do much, much better. 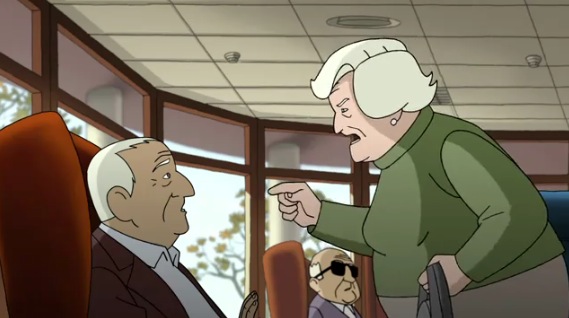 However Arrugas contains a magic that goes beyond visual art. It touches the soul. And in doing so, animators are reminded that our jobs are not so shallow as we sometimes make them. While being so caught up in arcs and curve editors, we can sometimes lose sight of the fact that we are telling tales that can change people’s lives. Sure, on occasion we work on films and shorts that are a bit more mindless fun, but we are not just moving lines and polygons. We are breathing life into characters, and if we do our job well and have characters people want to care about, any jittery lines or popping joints are quickly overlooked. It is easy to get caught up in the production of it all and forget the big picture. Arrugas never forgets the big picture for even a moment. 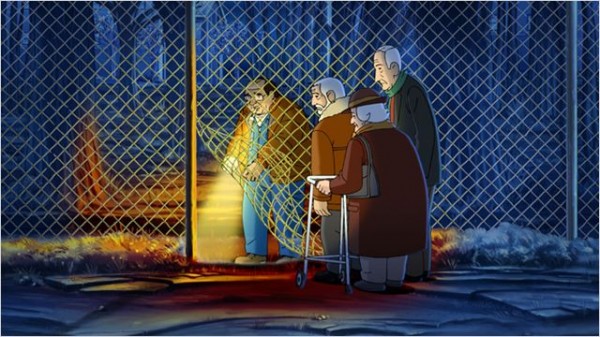 I do not live in an animation-centric city like Los Angeles or San Francisco. It is possible that brilliant gems like Arrugas happen more often than I’m aware of at small festivals outside my own little world. I do know that it is very rare to see a major animated release with the heart of this film, as well as a fully 2D feature in our increasingly 3D-only world. Not only because of that, but because it is such a powerful and exceptional work, Arrugas comes recommended to the highest degree. This is not a “cartoon for kids” but a world and journey for adults. The theater where I saw it was filled with many gray-haired folks, but truly anyone who has matured to the point of realizing their own mortality will find a touching trip into the lives of wonderful, real characters. At a time when many movies are mindless, and certainly animated features tend towards the juvenile, Arrugas should not be missed whether animation is your passion or not. Take along someone you love and enjoy this great film together.

It’s a crying shame that animation is seen as just for kids. We need more movies like this I guess, but actually released in theaters and advertised!

I was just searching for stuff on this movie. After hours of continuous Googleing, at last I got here. I wonder what’s the lack of Google strategy that do not rank this type of informative sites in top of the list. Usually the top sites are full of garbage and IMBD and Wikipedia instead of useful stuff. Or ads. Well glad you liked the film as much as me.

Nice write up. I just saw the film (in English) and I have to agree, it was a fantastic bit of filmmaking. Really deep and emotional. Made me want to go hang out with my grandpa ha ha. Everyone should see this.