Sony Picture Animation’s Hotel Transylvania is in theaters now and Animator Island had a chance to check out the Art and Making Of book released by Titan Books. Check out the full review here! 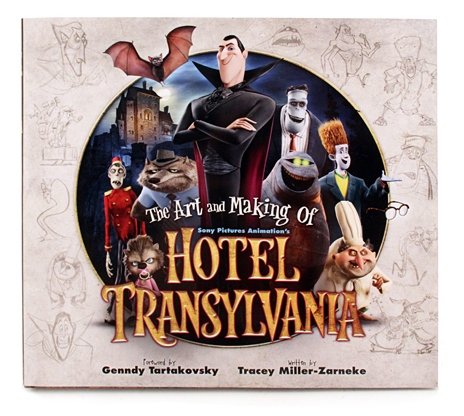 Boasting over 400 pieces of concept art, it’s easy for any animator to be in awe of a lot of the images that this book offers. After brief forwards by director Genndy Tartakovsky and Sony Pictures president Bob Osher, the book dives into two sections, Character Design and and Production Design.

The Character Designs of Hotel Transylvania

The title page for the start of the character design section (see partial below) eludes to great things beyond, as it features a two page spread of zombie bellhop concept art. The art is dynamic and wonderfully plussed, as well as superbly composed across the paper. After a short introduction the book features pages dedicated to the main characters, including their final posed 3D model. Dracula gets the largest spread with 10 full pages of art, designs, and examples from the film. The good news is this book takes cues from most Art Of books of the 21st century and keeps the shots directly from the film to a minimum. (After all, if you want to see shots that made it to the screen you’d just watch the movie!)

It doesn’t take long, even in just the first few pages of Character Designs, for a few artists and animators to stand out from the crowd. The 2D sketches of Craig Kellman and storyboard artist Denise Koyama leap off the page with a dynamism that shows their mastery. The “Dracula and Cape” designs by Kellman on page 24 should not be missed, and are a tremendous study of solid but fluid line work, and appealing shapes. (Likewise I don’t think any art of the character Jonathan, concept or final-film, can compare to Kellman’s drawings on page 40.) Another standout is Andrew Erekson, whose storyboard sketches are filled with that magical, “in-motion” quality that all artists strive to get into single, still images.

The art throughout this section ranges in terms of design quality, with some standouts (Noelle Triaureau’s Box Stamp designs on page 45 are quite nice) and some that are easy to forget. Unfortunately the biggest disappointment came on page 82 when we’re shown the final look of the zombie bellhops mentioned above. The final models and designs really lack the life (no pun intended) of the gestural sketches and hilarious concepts on the first pages. Alas, that can often be the case when some support characters are taken from 2D to the realm of 3D models.

Halfway through the book we switch gears to production design (which seems to be “anything that is not character design”) with an emphasis on landscapes and scenery. Here the art is almost entirely dazzling, including what I think is the best overall piece in the book, a lovely composition by Noelle Triaureau featuring the young vampire Mavis picking fruit outside a lone window. Though the piece doesn’t have the overall “monster” factor of the rest of the art, it is a wonderful blend of styles and contrasts that really deserve the full page it gets. Triaureau’s work is featured on several other pages, and is outstanding. 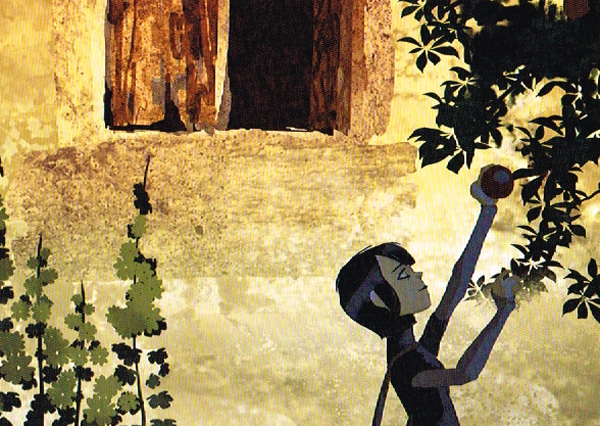 For the full artwork check out page 140 in the book!

One of the few “early 3D production” shots shown in the book comes on page 151, showing several untextured and unlit buildings. As a 2D animator I love seeing the 2D concept art that fills the book, but I wonder if there is enough to draw in the more technical 3D animator. This book seems to lean much more heavily towards pre-production art, rather than the computer generated images that make up the final film. For my money that is exactly what I love to see, but if you’re less interested in drawing and more into breakdowns of the 3D models, this may not be the place to look.

In terms of the book itself, it is well composed and the high quality you come to expect from Art Of books. Clocking in at 161 pages, it’s a fine addition to your animation bookshelf, especially if you’ve seen and enjoyed Hotel Transylvania. Even without viewing the film, though, there’s a lot of great concept art to study and learn from, and the artists should be content that their work will inspire future artists for years to come from these pages. 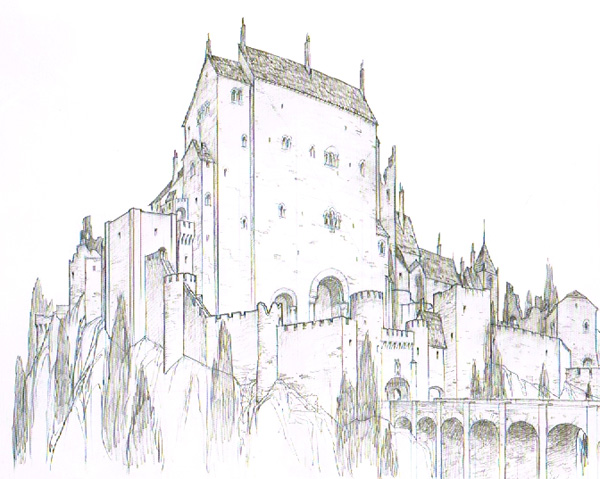 The Art and Making Of Sony Picture Animation’s Hotel Transylvania has a very long title, but it is a worthy addition to your book shelf already no doubt packed full of “Art Of” animation books. Author Tracey Miller-Zarneke has done a fine job of compiling a treasure trove of concept art for the film, though tech-heavy animators may find a lack of 3D model and texture related art. Overall highly recommended to any animator, especially those who found a fun time in theaters enjoying Hotel Transylvania.

The Art and Making Of Hotel Transylvania is available now from Titan Books and can be purchased at www.Titanbooks.com.

Save DreamWork’s “The Croods” is in theaters, and we’ve got a full review of the Art Of book from Titan Books! Save Share via:

Great write-up, imma check this book out. Do you know if it’s just online or also in stores 2?

Hey Louis! I believe the book is in stores as well as online, but I’m not certain. (I’d imagine so.) The trick then becomes FINDING a bookstore these days! They seem to be a pretty rare place.

Saw the movie over the weekend. Pretty good, not great. I would like to see this concept art in the book though because I bet its better than what ended up in the movie. Usually is.

I love art of books but their always super expensive! I usually check them out at my school library. Pays to attend art school!

Thanks, I’m gonna order a copy. I loved the movie.

dude I’d be all over this if I had any money! being in high school without a job sucks.

I quite enjoyed the film and it made me laugh out loud numerous times. I hope there will be a second one! I may buy this book thank you for the review.

Sold. Just ordered one on Amazon, thanks.