Titan Books returns with an interesting new “Art Of” title which combines the art of both of the first two Rio films into one inclusive tome. How does it stack up to the other art books we animators find a home for on our shelves?

Rio (and the upcoming Rio 2) follow the story of Blu and Jewel, two rare Blue Spix Macaws, and how they meet, fall in love, and eventually raise their chicks. Developed by Blue Sky Studios and 20th Century Fox Animation, the films feature a lush backdrop and extremely vibrant characters. It’s also very much about Rio and the “Rio state of mind.” As director Carlos Saldanha explains in the book:

“By definition I’m a Carioca, someone who was born in Rio, but that word represents much more than that. It’s a special “vibe”, a state of mind that one can only feel by being there.”

“Art Of” books produced by Titan Books have historically been broken up into two sections, the characters and the world. Here is no exception, with the “world” being called “locations.” Thankfully they’ve also included a two page spread of color boards from the films at the end, which it a nice addition that I hope continues (and expands!). 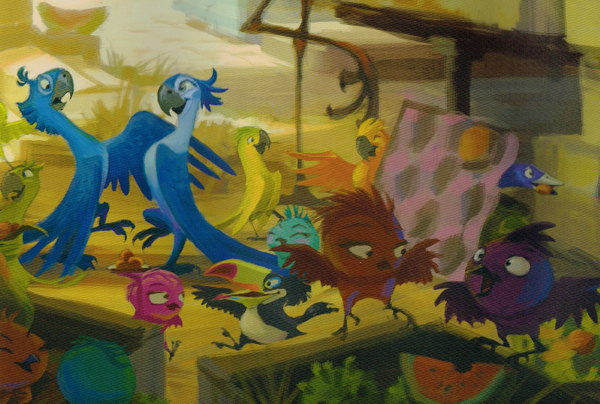 The Characters section details each of the major players in the film series, with a larger number of pages devoted to the main stars and less real estate dedicated to some of the supporting cast. There’s a lovely section on “birds” which shows a variety of character concepts ranging a vast number of species, and an extremely valuable (though small) section on “Feathers.” Frankly there are a few things in this book that make it absolutely worthwhile to own, and the Feathers spread is one of them.

Another is an image on page 43 detailing the construction of Pedro. Here we see he is likened to a water balloon, complete with illustrations on how that works. Truly I would adore an entire BOOK from this perspective, and it’s terrific to see thoughts and quotes from lead designer Sang Jun Lee sprinkled through. It’s quotes and insights like these that make Art Of books worth buying for reference, outside of the multitude of inspiring images. 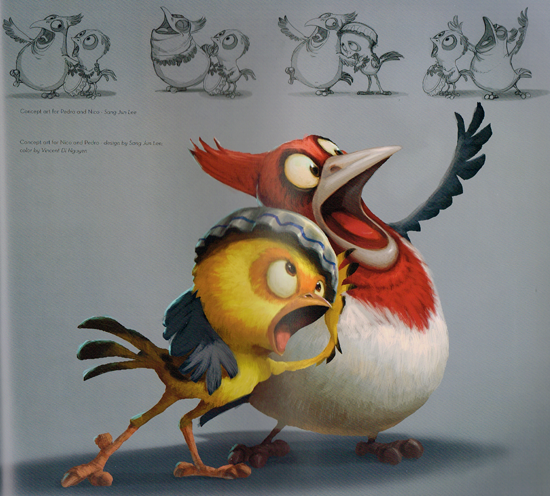 In the “multitude of inspiring images” category The Art of Rio doesn’t disappoint. With just over 190 pages chock full of concept art and rough design sketches, there’s plenty to sit and absorb. It’s just as colorful as the film, and shouldn’t disappoint fans and artists alike.

The Location section is about what you’d expect: a plethora of artwork to set the stage for the characters of Rio. From “Moose Lake Village” to Rio de Janeiro, these vast landscapes and interior illustrations are fantastic. There’s a great little image featuring some of the characters in silhouette as well, which is fantastic to see. A good reminder to animators of just how important silhouettes are when working.

One of my favorite aspects of the book is a little section buried in “Locations” that features graphic illustrations, poster design, and fictional logos for the world they’ve created. Honestly I’d love to see this expanded into it’s OWN section, rather than just a few pages, but the few pages we get are great and you can really appreciate the depth and care they took to make the world of Rio that much richer. Don’t miss that bit, starting on Page 160.

The Art of Rio combines artwork from both Rio films. In that sense, big fans of Rio may feel a little bit frustrated that each film did not receive a dedicated book. Still, that shouldn’t be cause for passing up a visual feast of concept art and drawings, and if you’re a fan of Rio it’s definitely a must-have. I also want to note that the paper chosen for printing is of outstanding quality, with a wonderful heft to it. When I first opened the book I thought the pages were sticking together! They have a great, solid, quality feel, and that’s something we artists can really appreciate.

Save There are a LOT of animation books out there. In almost all of them you’ll find the standard walk cycle, an explanation of keys and in-betweens, and many animation staples that any beginner needs to know. Eric Goldberg’s Character…

Save The are no shortage of websites for an aspiring (or experienced) animator to become lost in. Unfortunately more does not equal better. Since you should be spending as much time as possible actually doing animation, you want to get…

Save Disney Pixar’s Brave released in theaters in the summer of 2012, and Animator Island partnered with the UK’s Skwigly Animation Magazine to bring you a review from one artist to another! How does the movie stand up under the…

At the moment, without money to buy the book. But hopefully at some point!

Same. Wish I could buy ALL these!

The best part about Rio was the toucan. Since he’s back for the sequel, I’ll definitely go see it.

Hi, ʝսst wanted to say, I liked this review. It made me want to go get the book just for the quotes!
Keep on posting!

I wish it was two books, but oh well I guess.