DreamWork’s “The Croods” is in theaters, and we’ve got a full review of the Art Of book from Titan Books!

The Croods is an age old family dynamic based story that plays heavily on themes of “tradition vs. innovation.” (In some ways it reminds me of the tradition vs. innovation struggles on the animation industry as a whole!) Grug, the patriarch of a caveman-era family, leads his wife and children into the unknown after a massive earthquake destroys their home. 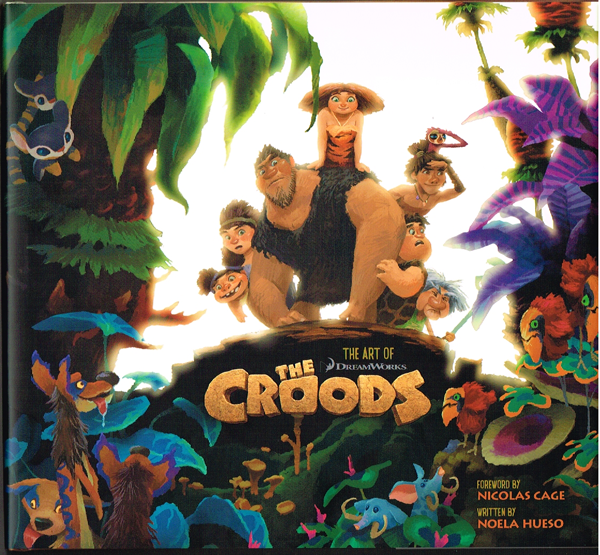 The Art of The Croods continues in the recent tradition of breaking things up into a “Character” section and a “World” section. The first 60 or so pages detail the family members in the film and their friends, with plenty of character concepts and sketches. The standouts here include some image by James Baxter (including pages 28, 47, and 49 among others) which could be placed in the dictionary under the very word “appeal.” There is also a fold-out spread with dozens of hilarious “animal mash-ups” in rough thumbnail form that are simply brilliant. I wouldn’t mind a poster of these pages, and would hang them on my wall as artwork if it didn’t mean ripping apart the poor book. 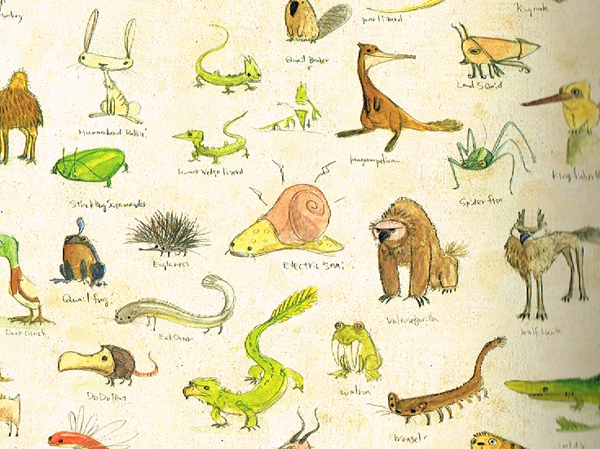 To be honest, I would have liked more of these character sketches and concepts, though that may be because character animation is my personal passion. I felt that unlike the Hotel Transylvania Art-Of book (reviewed here) this section was a bit lacking. A larger portion of the book is dedicated to the World of the Croods, which will make animators who lean more towards set design and landscape art very, very happy. 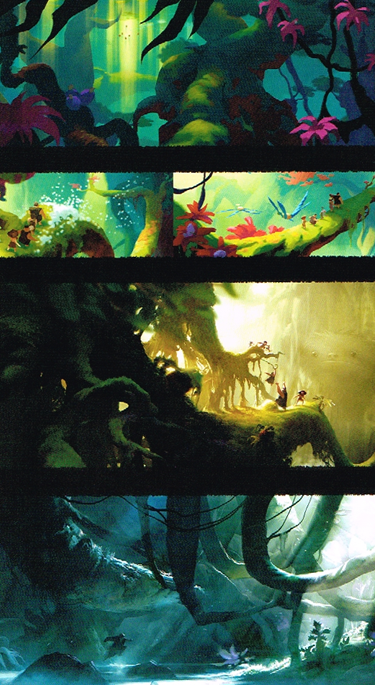 It is in “An Evolving World” that this book really hits its stride. Some of the conceptual masterpieces featured here are breathtaking. They are a tapestry of color, shape, and design that seem destined for a museum wall, perhaps even more than an animated film.

Some images remind me of early concept art of Disney’s Up (which is a huge compliment) and provide vast stretches of imagined jungle and prehistoric scenery. Truly this section is the biggest reason to own The Art of The Croods! 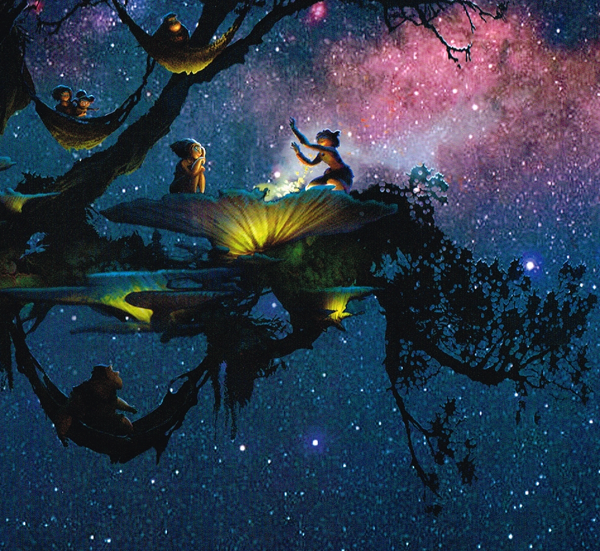 Anatomy of a Scene

At the tail end of the book they’ve tucked in a small “making of” type of walkthrough, detailing the process of one particular sequence (#2975 according to the production list). Some animators, especially those interested in 3D animation, would likely find an entire book of this sort of detail extremely exciting. As such they will be disappointed that only a few pages are dedicated to it. It almost seems like (cost aside) they would do well to publish two types of The Art of The Croods; One detailing the concept art, set design, and characters, and another leading you by the hand through some of the film’s greatest shots and its production.

The Art of The Croods is a must-own for fans of the movie who want to get a closer look at the art behind the final film that you watched on the big screen. For artists who enjoy a good (great!) scene painting and landscape design, there’s more than enough here to drool over. Character animators who long for page after page of character concepts and design may be a bit disappointed, though.

You can purchase The Art of Croods from its publisher, Titan Books, or via Amazon with the link below:

Save An unfortunate stereotype is that “Cartoons are for kids.” This point of view certainly exists in the United States, but thankfully many other countries do not share the same perspective. Enter Arrugas, from Spanish Perro Verde Films and Cromosoma,…

Save Sony Picture Animation’s Hotel Transylvania is in theaters now and Animator Island had a chance to check out the Art and Making Of book released by Titan Books. Check out the full review here! Save Share via:

I have so many Art Of books already that I don’t know if my shelf will hold one more! But this one will be mine and I’ll buy a new shelf! XD

I loved the movie so I think I’ll get this book to sit next to the DVD when it comes out. Thank you for the review!

I HATED how this movie looked. The characters were sooooooo ugly and I didn’t even want to look at them by the end. The story was ok but the ugly characters ruined it.

I’m gonna watch for sales on this one. I want it but funds are short and art of movie books are so damn expensive!

i agree that the characters are not so beautiful however, it justifies the story. it takes us to a different world

I was recommended this site by my cousin. Wonderful! Thank you! I was wondering if this book was a good one to get and now I know. I loved The Croods.