I was studying Disney’s Aladdin frame by frame (most interesting, if you’ve never done it!) and came across something I thought I’d share. In the scene when Jafar is finding the “diamond in the rough” his trusty sidekick Iago gets sucked into the gears of the contraption they’re using and then hurls across the screen and slams into the wall. Broken down, here are the main drawings of that happening: 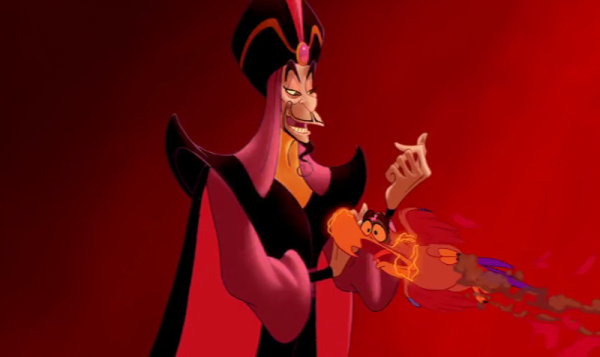 In this shot, you see Iago clearly, for a single frame, zooming across the screen. Notice a few things, first. His legs are not both back. One is up with his knee bent. His wings are askew as well. This is classic “non-twinning” animation, which encourages you to never have perfect symmetry to get the best (most interesting) poses. Though sometimes symmetry is the correct choice, breaking the mirrored image can have a lot of advantages. Remember, this frame is on screen for ONE FRAME, or 1/24th of a single second. In fact, you’d be hard pressed to SEE it if you didn’t go frame by frame. Yet despite that, the care involved in the pose and expression and FEEL is still there. Amazing.

What the?! Yep, this is the next frame of the shot. Iago has FOUR EYES! This is an example of a blurring technique. The most interesting thing, to me, is that it is not anywhere BUT his eyes! In most blur shots there is a front edge, then the blur, and the back edge. Here the animator opted to only do the effect on Iago’s eyeballs. Interesting! Once again, this is on screen for one frame. 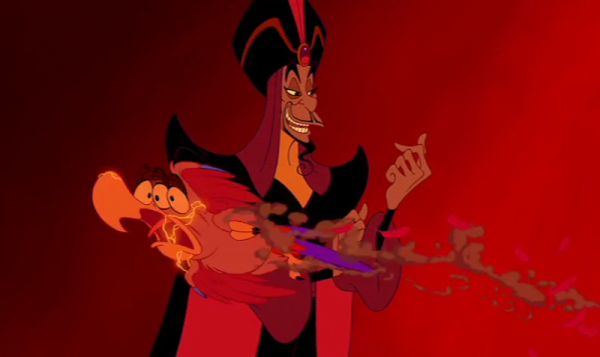 Finally we see this single frame, where the number of eyes has dropped to just three (“just!”). Note that it went from two straight to four, then back to three before returning to two (there is one last frame before he leaves the screen, however it is a normal shot of him with no effect added). The smoke trail and feathers streak across and disperse as Jafar finishes speaking. Again, what’s important to realize is that since this entire action takes place in 1/12th of a second, you don’t consciously SEE this. You see something fly across the screen, but the trail is what makes it stick as it slowly fades away.

Crazy stuff! I really enjoy finding things like this. There’s a scene earlier with Jasmine where she is blinking every few frames. If you saw someone doing that in real life, it would be odd. But it fits perfectly with the actions she’s going through, and feels just right in real time.

It’s important to note, of course, that these images are copyright of Walt Disney Pictures! The genius animators who worked on this film deserve 100% of the credit, I’m merely an excited observer.

If you have a few minutes of free time at some point, why not give watching some brilliant animation one frame at a time a shot? It’s incredible what you can find that you’d never see in real time! You can see more Studying the Masters analysis by clicking here.

Very interesting tip! I’ve studied some animation frame by frame, mostly cutout animation, and it has always amazed me to find hidden elements that add to impact of the scene. Thanks for sharing!

Thanks for the rundown!
I have a quick question regarding your technique for this – how do you watch the movies frame by frame?

There are a few ways to do it, kalle. The first is to have a digital copy of the movie, like the sort you’d buy on iTunes for example. Then using many computer programs (even simple things like Quicktime) you can step through one frame at a time.

The other option is to be sure to look for that feature when purchasing a DVD or Blu-ray player. Some have it, and some don’t. It isn’t always the expensive ones that do either- I have a very cheap one that does it nicely!

You can also sometimes find people who have made gifs of animations, and see them one frame at a time that way, though it’s more limited.

Thank you!
Yeah I like to use gifs, but they’re not always 24 fps sadly. I’ll go and see if I can get some movies off of iTunes then!

Whoa that’s insane! I never saw that before prolly cause it goes so fast. I went and put in the DVD and it was cool to see it at normal speed I would never have noticed the multiple eyes.

Make your own life time more simple take the loan and all you want.

I think they may have done just the eyes because the eyes are kinda of highlights and when we look at Iago’s face to see the expresiion he carries, we can tell mostly from the eyes – the eyes are were we look.

That’s a good call, I hadn’t thought about that. Also being white that spot gives the most contrast to the surrounding areas, so another good reason!

do more of these plz!

I found this article on Reddit and its great. I hope I will see more of them soon.

I love seeing motion blurs in action! So much fun what you can get away with! Many thanks!

i have a question about animating before computers…
how did they make the backgrounds stay the same when its frame by frame???

Back then they put everything under a camera on different layers. So if the character is moving they would switch only the transparent foil with the character on it and don’t touch the painted background below.