Recently I came across some very wise questioning by an animator named Peter J. Casey during an online discussion of “How to get better at art” over at AnimationForum.net. Today I want to revise the answer I gave there and take a deeper look at practicing form and volume.

In the discussion, it was brought up that you need to practice fundamentals (very true). Every good artist will tell you that, but Peter brought up a good point:

“Ok then define it here, because ‘Foundations’ have never been explained to me. Ever.

This is what I’ve gathered from ‘foundations.’

Practice form and volume: Ok yeah, I get that, make the drawing look like it appears in 3d space. But no one ever explained to me how the hell to go about doing it. “Your drawings look flat, you need to practice and know the form.” Ok, how? Can you explain to me how? Now you’re taking out and comparing my drawings to someone else. Oh wow, yes, that dead guy is a lot better than I am now. Thank you for that insight that I already know, but that still doesn’t explain to me what I’m suppose to pay attention to when I’m drawing. The forms you say? Hmmm… I think we just went full circle.“

First I want to point out that Peter is well ahead of me in one very important way: He asked what I had wondered about for years. The valuable lesson here is: ASK when you have these questions. That’s something I rarely did a few years ago, and who knows where I might be now if I had. So ask.

This is a tricky one because honestly one day I just “got” it. I can’t tell you what happened, I just SAW how to do it. But I think there are things that will lead you towards that concept.

The best advice I can give is to not draw anything ever again. Instead, SCULPT the images you’re creating using pencil and paper. That sounds weird, but it’s an important mental shift. Look at this famous handout image from Glen Keane: 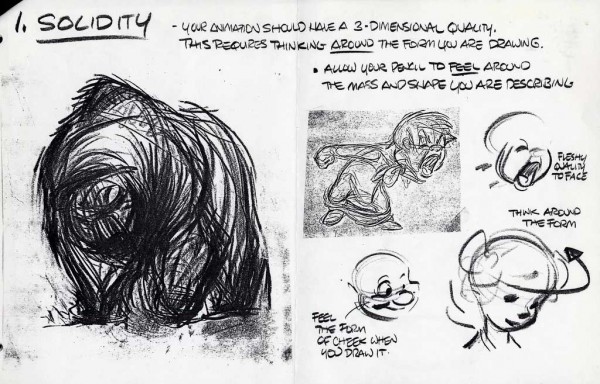 See that one at the bottom that says “feel the form of the cheek when you draw it?” That image/sentence can change your life. It won’t happen overnight, but if you look at it every day once you “get” it everything will change. Suddenly you’re not drawing outlines of things. You’re sculpting with pencil. You’re FEELING the roundness of the cheek, through your hand, down the pencil, and around the paper. And honestly it will come with practice, but you have to try to feel it. Eventually you get there; it’s a process. (You can read more about this process, and a great way to go into it, right here.)

Another thing that helped me SO much was this:
http://www.floobynooby.com/ICAN102/H…_Animation.pdf

Specifically pages 5 and 6. The artist, Doug Compton, is BRILLIANT when it comes to the principals and basics, but the more complex stuff is not quite as elegant so focus on the less-complicated drawings there. I’m like that too. My simple stuff is MUCH better than my complex stuff. Everyone has their strengths. (I wish my simple stuff was as amazing as his, but I’m working on it!)

Anyway, pages 5 and 6 introduce you to the flour sack. The flour sack can CHANGE YOUR LIFE. (I know I keep saying that, but it’s true.) When you start feeling AROUND the form of the flour sack, and making it squash and stretch as if you’re carving it out of the paper, everything changes. Practice that, it will help a lot. Study those drawings. Look THROUGH them, not just at the outlines. The outlines are not what you’re drawing. You’re drawing the SURFACE of the forms. Say it again and again to yourself. It won’t click like a light bulb tonight, but it WILL happen if you keep at it.

Here’s my last bit of form advice, though it’s not exactly from me as it is TO me. One that, again, changed my life.
http://joshuatabackart.blogspot.com/…appy-2012.html

Joshua Taback was kind enough to take a whole blog post to respond to one of my comments. (As an aside, when you get good at this please pass it on to some up-and-coming artist like he did to me! Gotta keep this cycle going!) One thing he said I read, but didn’t give much thought to:

“As far as practicing, we can never do enough of it. But in my opinion, the number one best way to improve your drawing is to animate, traditionally. Not with Flash or Maya or another CGI equivalent. Traditional animation will make you think in ways you wouldn’t by doing single illustrative drawings. It shows you things you never would have thought of otherwise. You find things you never would have found. Animating traditionally will undoubtedly improve anyone’s drawing.”

I stupidly ignored this for a few weeks (thank GOD it was only a few weeks and not, like, years). Then finally I took the advice and started practicing BY doing animation. With paper and pencil. And OH MY GOSH HE WAS SO RIGHT! Suddenly you find things you never saw before. The forms have PURPOSE. It isn’t “here is a character in a pose” but “This guy is jumping, and in the middle of the jump it looks like this.” By adding the element of TIME (something came RIGHT BEFORE and something will happen RIGHT AFTER) it changes everything. Like I said, there’s purpose now. It’s no longer a “pose” it’s an action. I can’t tell you enough how much of a difference this has made over just the past month. It’s like a whole new world, just from this one tip. 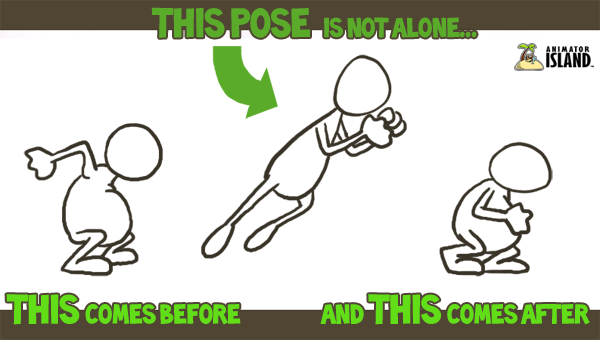 Next week we’ll look at Part 2 of Peter’s question, dealing with Posing. (Click here to go directly to that article now.) If you want to be sure to catch it as soon as it’s posted, consider following Animator Island on Twitter, RSS, or Facebook! Until then, keep on drawing.

Thanks for sharing this with everyone else! Asking questions is for sure a good thing. Sometimes no one answers you online though………

Yes, sometimes questions go unanswered. That’s when you have to really keep searching, because eventually you’ll come across that person who has the wisdom you’re looking for!

Wow those are some amazing resources! I’m going to spend all day reading now!!

Great article J.K. And thanks so much for the mention. You made my day knowing that something I passed on has helped so much. I still to this day think of things people told me 10 – 20 years ago whenever I draw certain things a certain way. It’s a thrill to know I did that for someone.

I’m also SO glad you mentioned the SCULPTING the images bit. It’s something I always thought of over the years, and came across it THROUGH ANIMATING. It’s all magic and we are so fortunate to have been given the top hat and rabbit.

Really enjoy the fresh take, questions are good. Thank you for some good answers.

Hey I wanted to thank you for a very well constructed response. Gave me a lot of insights that I had been searching for.

Wow this was a really amazing post! Super duper helpful.

Volume is like the hardest thing ever to get! All my stuff is flat looking. 🙁

thanks so much for the depth of this answer! I too have so much trouble with grasping volumetric drawing, and I want to desperately understand it to improve my work.