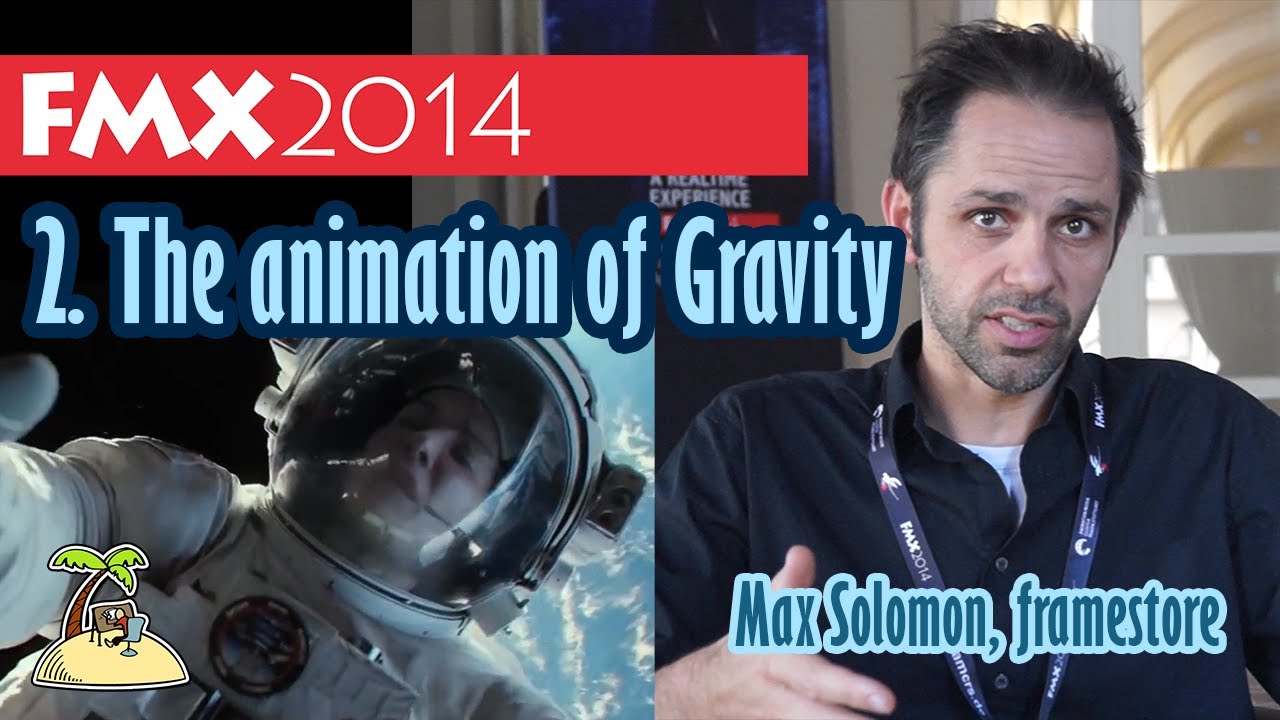 Animation Supervisor Max Solomon tells us more about the animation of Gravity. He explains the decision to use keyframeA keyframe marks an important step within an animation like the start or end of a motion. In computer animation a keyfra... More animation, the challenges of zero gravity and has some valuable advice about getting started in the industry. Watch the interview above or read some excerpts in this article.

1:00 Alfonso Cuarón the Director of Gravity did initially not plan to replace everything with keyframeA keyframe marks an important step within an animation like the start or end of a motion. In computer animation a keyfra... More animation. Initially they wanted to build the set and shoot with actors on wires, but after some tests quickly moved a way from that concept.

1:40 “The reasons that most films don’t have zero gravity, the reason that they ignore the weightlessness of space is that it’s very hard to make believable. That’s why most sci-fi films ignore it and the actors just walk around on spaceships, as if they were on earth.”

2:00 Another challenges was Alfonso’s style, which consists out of very long shots that have to be carefully choreographed. This is easier to do digitally rather than having to coordinate the team and the actors to deliver the perfect take.

2:40 The helmet of the space suits was a clear line between the live action footage and the CG. The CG glass helped to melt the two together.

3:22 Max Solomon points out that the live action footage was a welcome reference for the animation, although most of the bodies motion was completely different from what was done on set. 4:24 The actor’s emotional performance was a strong guide for the keyframeA keyframe marks an important step within an animation like the start or end of a motion. In computer animation a keyfra... More animation.

5:00 Because the actors never actually were in zero gravity and never wore a real space suit, the motions on set were never quite right and were therefore completely redone in animation.

5:30 At one point they experimented with motion capturing and actually recorded someone going through Sandra Bullock’s performance. Eventually they abandoned this because it never matched with Sandra’s facial performance and did not deliver what the director was looking for (he wasn’t involved in the recording process). In the end the motion capturing only served as reference for energy and posing.

6:28 “We actually found the most beneficial thing was for the animator to just go downstairs and put the helmet and the gloves on themselves and the space jacket that we had and to work through the performance, just video themselves. That was a very productive way of very quickly finding performance ideas.”

7:18 Animating zero gravity is as complex as animating characters on earth, only the rules are different. However, there was a slight poetic license the animators could take, because the audience doesn’t notice if things aren’t quite right, “as long as the energy was good and it’s existing”. [Editor’s note: Did you notice that Sandra Bullocks character letting go of the George Clooney character was completely against the zero gravity rules?]

8:15 The challenge for animation was much more than just making people float to convey zero gravity (which was a concern for animators that were ask to join the project). “Making it real, making it complex, believable and interesting was a challenging as anything we’ve done before”

9:08 Max Solomon about his motivation to do VFX animation: “What’s exciting about visual effect is that you can make things that don’t seem possible, possible. It’s a little bit like a magic trick. People have an instinctive hunger to see something new, to see something shown in a different way.”

10:00 The special thing about Gravity was that it showed space in a way that we haven’t really seen it before. “That’s the reason the film was so well revived. That it was the first time that anybody had not only reproduced the experience of being an astronaut but also done it so beautifully.”

10:43 Questions by MidnightInk from the 11secondclub: 1. Was it tough breaking into the industry? Max Solomon answers that it was tough indeed and explains how he started out as a runner for live action films in a small company that did very small TV spots with a small CG Softimage team. The 3D medium excited him so that he learned the software self-taught.

11:40 Since then the industry has grown immensely. There is a much bigger volume of work and thousands people working in this field. “The competition and the quality is immense.”

12:25 Solomon answers the second question “Any tips for aspiring animators?” quoting football (soccer star) Thierry Henry, who said that he never thought about what he would get from football, he just wanted to play football. “I think this is a really great message for everyone: You should just love doing what you do and whatever comes from it is great. Just enjoy it and do your best. And I think if you do that you will always be happy, because you’ll be doing something you love. And ultimately I also think you will be good at it, because you believe in it and you are passionate about it.”

13:25 He also recommends to take every opportunity you get, because you never know how something might turn out. “Often it’s the things that you don’t expect that are the most rewarding”

Now it’s your turn to join the discussion in the comments below! What did you think about Gravity? Which animation styles do you prefer – cartoony or realistic? How are you getting started in the industry?

By loading the video, you agree to YouTube’s privacy policy.Learn more Load video Always unblock YouTube Legendary acting teacher Ed Hooks tells us about how he got into teaching acting for animators. We also dive into some acting theory, discuss…

Save By loading the video, you agree to YouTube’s privacy policy.Learn more Load video Always unblock YouTube Watch and learn while awesome artist Michaela Gote is coloring our first ever merch. Check out her website https://www.michaelagote.com/ or twitch channel: https://www.twitch.tv/palien_…

“he never thought about what he would get from football, he just wanted to play football.”

I loved this quote, what a great way to think about it. And something I think we should all keep in mind, if we want to lead happier lives. 🙂

That was really an interesting inteview thank you. I loved Gravity but I kept thinking about how it was so crazy the character was still alive. It is nice to hear they knew it.

I absolutely love your site and this was really good to watch. I like the new videos just wanted to let you know. Could you interview more famous people like this? Maybe you can talk to John Lasseter, he is an inspiration to me. If you do ask him how he hires because because I want to work as his assistant! XD

The video looks weird like it is not in HD or something.

Guess which day I forgot to bring the one I have 😛