Today’s secret of animation comes from none other than the master Glen Keane. He advises that if you have an action to animate, see whether or not you can save some of it for “when you get there.”

The concept of “don’t do everything all at once” is nothing new to most animators, but this twist on the classic principal might need a little explaining.

Let’s say you have a character whose action is turning and pointing to something off screen, likely in response to talking with another character. Keyframes of this action might look something like this: 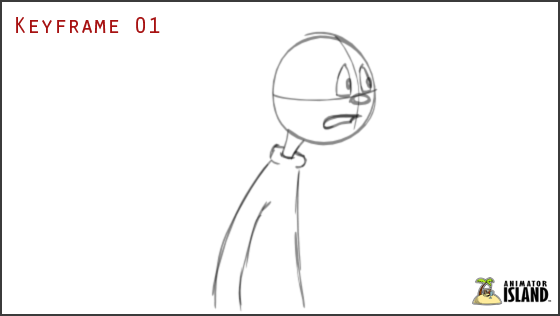 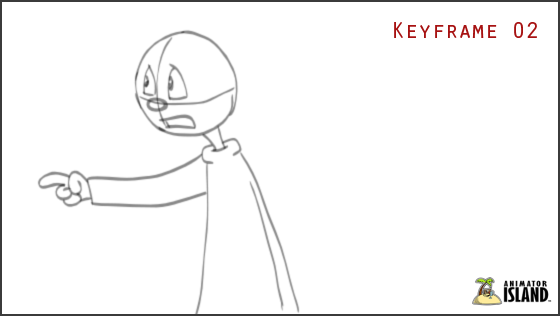 At this point you have two options.

The quickest way to achieve this motion is to place a breakdownA breakdown is a pose at the turning point of a motion path - often during the fastest moment of a motion. It's often se... More directly between the two drawings (adding, of course, a blink and head bob on the turn!). That would end up something like this: 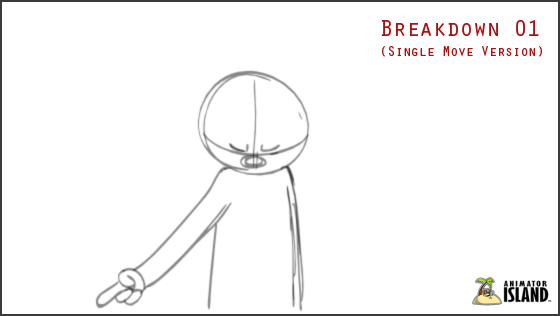 And when filled with some in-betweens, you’d end up with the following result:

This works, there’s no doubt about that. But it could be much more interesting if we take Mr. Keane’s advice to save something for later.

In this case what we’ll save is the pointing motion. Instead of “turn AND point” the movement becomes “turn THEN point.” For this version we have two breakdownA breakdown is a pose at the turning point of a motion path - often during the fastest moment of a motion. It's often se... More drawings. 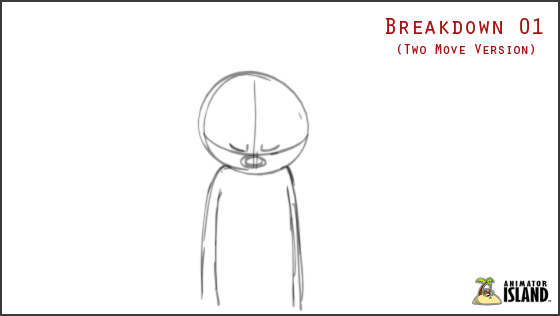 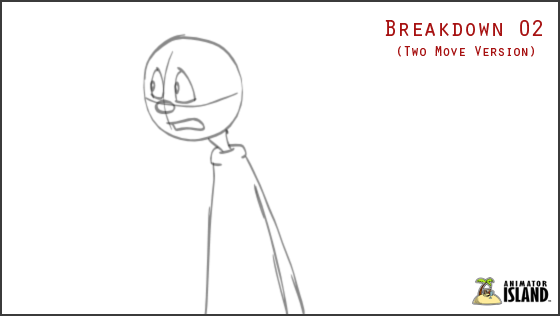 Here we are almost animating two actions (though they are connected by one larger movement). First he turns, then he points. Here is what that might look like in motion:

The movement becomes not only more interesting, but draws the action out across a longer period of time. If this character were speaking, that would give him something to do besides just stand and talk (which is boring to watch).

In the example above you could expand things even more. You may notice the hand has some dragLoose, attached parts tend to start moving with a delay and lag behind because of inertia. This is clearly visible at th... More on it in the two-step animation. You could delay that even longer and have the finger “unfold” once the arm reaches its destination, essentially “saving” the finger point a second time. Try it out and see how much you can create out of a simple movement!

The next time you’re animating a scene, look for what you might be able to save for “later” so your character has “something to do.” Remember that you want the actions to be connected, but they don’t have to happen at the exact same time. Variety keeps things interesting and appealing!

Save Last year we ran a series (found here) on ways to relax and keep away stress for animators. In Part 2 of the series we put out a call for YOUR best ideas and how you personally manage to…

Save Chances are that you have already seen Sergio Pablo’s trailer “Klaus” and maybe you were among the many people whose jaw dropped. Gorgeous 2D animation shaded like a 3D CGI movie! Unbelievable! In this article I want to discuss…

We’re extremely excited today to announce a project that has been in the works behind-the-scenes for a very long time. A new online animation school from the creators of Animator Island! [youtube width=”550″ height=”445″]http://youtu.be/L6UBUVZcwqA[/youtube] Read on to learn how to…

Save Key frames and main poses are vitally important in animation, but that doesn’t mean you should ignore what comes in-between! Today we take a look at how a few simple changes in the journey from key to key dramatically…

Glen Keane is amazing. I wish he did 3D animation sometimes because I bet it would be so much better than most of what is made today.

I’ll try to do this one next time I’m animating seems fun!

Really a valuable tip. Thanks for sharing.

I have bookmarked this article so I can come back later and read it again. Its something I don’t want to forget when animating and I think I probably will lol.

Glen Keane is a F***ing genius.

It’s a great tip, and really all about acting and motivation. Walt Disney said “the mind is the pilot,” meaning that thought drives action. A shot like the first example is a mechanical solution to the problem. The second example shows life in the character, in that he has to turn and look before he points, just like any of us would do. And that’s our goal when animating – imbuing your character with life, not merely recreating the mechanics of motion.

Well put! And so very true.

Great advice! It really makes the difference between average animation and great stuff you want to watch over and over.

Great information. Lucky me I ran across your website by chance (stumbleupon). Reading all the other articles now.

I love Glen Keane so much.

Glen Keane is amazing did you see his new film?