Right to the point: If you haven’t practiced animation in a while, you will be worse at it now than when you last animated something. How can you fix this? Read on.

First, we need to remember this is normal. It can be painful to return to something we were once good at but are now out of practice with. It is natural to feel overwhelmed. All those skills we developed suddenly seem to have vanished.

Good news: They are still in there. They are just groggy and half-asleep. 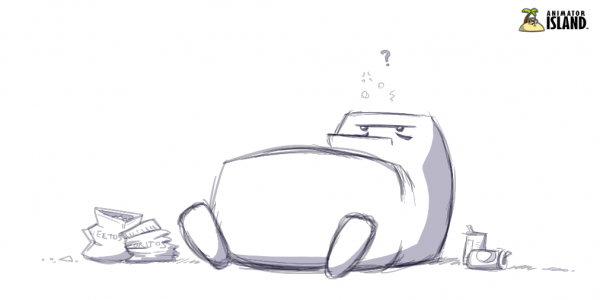 The key is to approach animation slightly differently if this is happening to you. Remember that the skill still exists. At the same time, you MUST keep in mind the age-old “Biggest Mistake Beginner Animators Make.” (Click here for details.)

“But I’m not a beginner,” you may say, slightly offended.

Right now, though, aspects of you are.

When we don’t practice, we get rusty. And that rust puts us back at the starting point in many ways. Our beautiful consolation prize is we will zoom towards where we once were, far faster this time around. In the meantime, we can’t jump straight into the deep end of the pool.

We must re-train rusty skills. That means going back to our dear friend The Bouncing Ball and other basic, fundamental exercises. Start small. If you do, you won’t feel so much frustration. It may be a challenge to set aside “the fun stuff” of full character or effect animation, but you will be back to them soon. Today is just Day 1 of that process, and Day 1 means keeping your first attempt as simple as possible. Work on your Principles. Here they are as a reminder if they’ve slipped out of mind:

Pick one from the list. Focus on that. Certainly in your exercise you will use more than one (we always do) but focus on one. Make “proper squash and stretch on a ball” your goal. Or do something with brilliant anticipationPreparing a motion by first going into the opposite direction to build up momentum is called anticipation. The anticipat... More, even if it’s just a cube jumping over a pit.

By starting with a simple exercise, you will set yourself up for a vital success that reminds you not only that you can definitely accomplish your goals, but that you love animating. It will be a boost to push you further as you get back to work. Plus because you’re keeping it simple, you will have a “completed” piece in less than a day. A quick win right now is exactly what you need to help shake off the rust.

The key here is to ease your way back into regular animation practice. This is the first step. 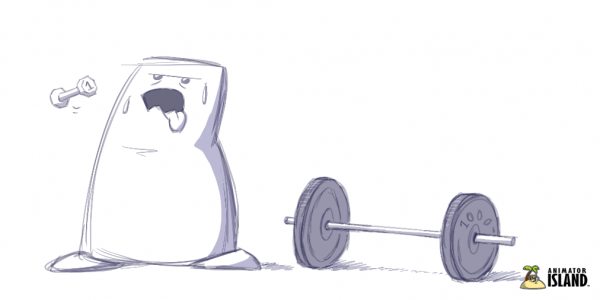 It can be extremely tempting once you do a few simple exercises (or even just one) to feel ready to get back to animating bigger things. By all means, give it a try. See how it goes. If you find that you’re ready, that’s great. However if it still feels like you aren’t back to where you once were, go back to basics. It will do you no good to rush ahead here. You will only end up frustrated and bitter.

Accidentally falling out of practice is something ALL artists go through now and then. Don’t be discouraged, you are not alone. Take a deep breath, open up your favorite animation software or pull out a blank piece of paper, and start back on the path you already know so well. Have some FUN with the basics. Stretch your imagination a bit while you’re at it. It’s far better to take this first step a second (or third, or twentieth) time than to put it off for yet another day. You can do it. Start now.

Have you ever felt rusty after falling out of practice? Share your story in the comments below so we can all remember we’re not alone in this.

Save Today we talk about the benefits of using version numbers when naming files and what you need to keep in mind to put this concept to full use. It can literally save your whole workday! Share via:

By loading the video, you agree to YouTube’s privacy policy.Learn more Load video Always unblock YouTube Are you using video editing software during the production of your animated films? Let’s explore the many ways that it can benefit and guide your…

Save Today animation veteran Mike Gasaway (Jimmy Neutron, Planet Sheen) shares a guest post on “noodling” and how it might be secretly destroying your workflow and final animation. Plus, precisely how to stop it in your future scenes. Share via:

Honestly , animating once , and stopping for months , I’m trying to find a way to push my self to animate but still , no use , I don’t want to lose all my skills which I developed sudden , you helped me. Thanks a lot

Glad to hear it was helpful! It’s hard, most definitely. Pushing yourself is one of life’s great challenges. 🙂 Keep at it! Remember even a small exercise like a bouncing ball is still progress as long as you put your all into it! Don’t think you have to sit down and animate a full film or shot every time.

Few words to describe me would be (not so recent) Graduate, Unemployed and a MAJOR procrastinator. A terrible trio. I’ve just decided got off my back and start practicing again. A Much Needed read. Your words were direct and just..To the Point! Thanks a bunch for that. 🙂